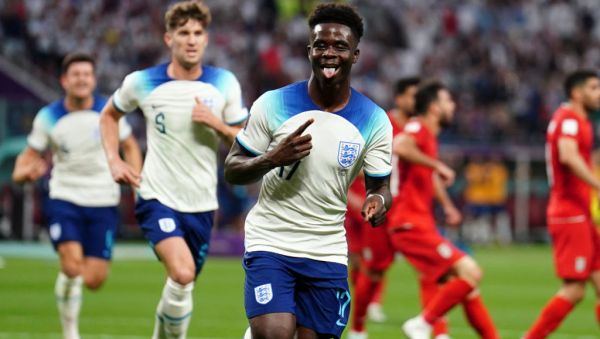 Bukayo Saka hit a brace as England started their World Cup campaign with a fine win over Iran – before praising the outpouring of support he received after his Euro 2020 ordeal.

The Arsenal forward was racially abused after missing the decisive penalty in the shoot-out defeat to Italy in the final.

Since then he has been named England’s Player of the Year, ended last season as Arsenal’s top goalscorer and has played a major role in the Gunners sitting five points clear at the top of the Premier League.

Saka was selected ahead of Phil Foden to start against Iran and emphatically proved Gareth Southgate’s decision right – scoring a fine volley and a curling effort in the 6-2 victory at Khalifa International Stadium.

The 21-year-old went on to be named man of the match on his World Cup debut and spoke afterwards about his recovery from last summer.

“I think obviously it was quite a while ago now but it is a moment that has been with me and will be with me forever,” he said.

“I’m so blessed and so grateful to have coaching staff, not only here with Gareth but also at Arsenal, my friends and family who put their arm around me, the love of my team-mates and the nation has supported me and helped me get back into a good place.

“When I feel that love from everyone around me, it is really good for me and gives me a lot of confidence and belief in myself to go again. It is why every time I get the chance to wear an England shirt, I’m honoured, give 110 per cent and do my best to make the nation proud.”

Southgate was unhappy that his side had shipped two goals in their Group B opener but Saka hailed the attacking intent of the team as Jude Bellingham, Raheem Sterling, Marcus Rashford and Jack Grealish also got on the scoresheet.

“I feel like you always know coming into a World Cup that every game is going to be difficult, we knew the quality that Iran had – you could see that, they managed to score two goals,” he added.

“I think we performed so good offensively and created a lot of chances, scored a lot of goals and could have had more so overall we are happy with our performance.”