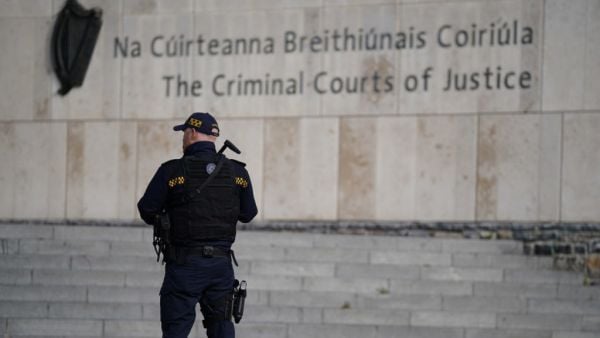 Gardaí have recovered records from a tracking device deployed on former Sinn Féin councillor Jonathan Dowdall’s jeep which were believed to have been destroyed, the Regency murder trial has heard.

Sean Gillane SC, prosecuting, told the Special Criminal Court on Monday that the Garda National Cyber Crime Bureau had conducted a “fairly extensive” operation since last week, in which a securely stored desktop computer that had been listed for destruction had been examined.

Gerard ‘The Monk’ Hutch (59), last of The Paddocks, Clontarf, Dublin 3, is on trial at the non-jury court, charged with the murder of Kinahan Cartel member David Byrne (33) during a boxing weigh-in at the Regency Hotel on February 5th, 2016. Mr Hutch denies the charges.

On Monday, Mr Gillane added: “In the course of the examination of that device, it appears that a working copy of the material in question was located and is available for examination”.

He said this was confirmed to him on Sunday evening and that he hoped to be able to provide the defence with additional information later on Monday morning.

In reply, Brendan Grehan SC, defending Gerard ‘The Monk’ Hutch, said it appeared that “what was lost is now found” and asked the three-judge court for some time to decide on how to proceed.

The Garda Assistant Commissioner of Crime and Security was expected to give evidence on Monday morning. However, Mr Gillane said he was not in a position to call Asst Comm Orla McPartlin yet, with the trial adjourned until 2pm.

Mr Grehan told the court last Tuesday that gardaí destroyed records from a tracking device which had been placed on Dowdall’s Toyota Land Cruiser jeep when he is alleged to have driven murder accused Mr Hutch north for a meeting with republicans in the aftermath of the Regency shooting.

Counsel said “disturbingly” the notes were destroyed by gardaí after his client was arrested and charged with the murder of Mr Byrne and that the destruction of the tracker records was authorised on February 7th this year.

Mr Grehan said the destruction of these records was a “real problem” and he did not accept the State’s assertion that it was done in accordance with the Criminal Justice Surveillance Act 2009.

Last week, the former head of the National Surveillance Unit (NSU), who signed the authorisation for the destruction of the tracker records on February 7th, said he did not consult the senior investigating officer of the Regency Hotel murder investigation or the Director of Public Prosecutions (DPP) when he destroyed records from a tracker device deployed on Dowdall’s Toyota Land Cruiser.

The data, it was said, was “gone forevermore” with no possibility of recreating the destroyed records.

Retired Detective Inspector Ciaran Hoey testified last Wednesday that he carried out a review of all the data information held by the NSU in early 2020 to ensure they were in compliance with the Surveillance Act of 2009.

Data records older than three years which were not required for prosecution or appeal were destroyed in order to improve storage and the security of data, he said.

Mr Hoey, who was Detective Inspector with the NSU in 2016, said he did not believe the records would be used in the prosecution when he ordered their destruction just months before the Regency Hotel murder trial began last month.

He also said data from a tracking device to prove the location of a vehicle, person or thing at a particular time had never been used as evidence in the history of the Surveillance Act.

Furthermore, he said the best evidence was the NSU members’ sightings coupled with the CCTV footage and that was what was to be used in this trial.

During the cross-examination, Mr Hoey said that Asst Comm McPartlin had “signed off” on the destruction order on March 23rd. On that day, a total of 87 orders were signed off on with information provided on a spreadsheet relating to relevant dates and details of Dowdall’s jeep being tracked.

Mr Hoey said he did not make Asst Comm McPartlin aware that the current trial was proceeding, nor that the vehicle was related to Dowdall or Mr Hutch.