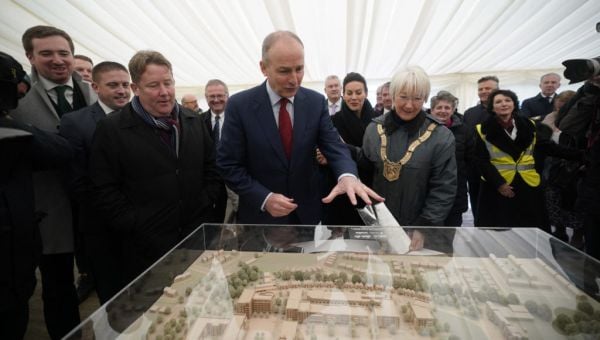 The Government is to look at how it can “further expedite” the delivery of housing to ensure it reaches its targets next year, the Minister for Housing said.

Darragh O’Brien said there are “always challenges” in the delivery of housing, but the Government has a “robust” plan.

It follows the Tánaiste Leo Varadkar saying the target for next year is “at risk”.

Mr Varadkar told RTÉ on Sunday that delivering more than the 30,000 homes under Housing for All in 2023 is “going to be a challenge”.

Speaking at the official sod-turning for Shanganagh, Ireland’s largest affordable housing scheme, Mr O’Brien said the Government would exceed its target of 24,600 new homes this year.

He said: “There’s always challenges in delivery. But we’ve the plan in place to do that. And it’s taking hold.

“But it’s about building that scale up within the sector. So we have a good sight line on what’s coming down the track next year.”

He added: “But as you know, even this year with the issues with Ukraine and supply chain and that.

“So there will always be challenges, but we have a good robust plan that’s fully funded. And we know what’s on the horizon. We know what our pipeline is, and we’re going to do everything we can to make sure we attain those targets.”

Taoiseach Micheál Martin said the Government’s housing plan is “working”, but he acknowledged they needed to “double down” on their efforts to reach targets next year.

“We are very conscious that we have to double down and make sure that we can increase the pipeline again for 2023 and reach our targets there,” the Taoiseach said, adding that the Government was looking at “new approaches”.

Mr Martin added: “The plan is working. This year we will, in all likelihood to exceed our targets.

“But we have to we have to keep the focus on because…this is the biggest issue facing us.

Mr Martin described the Shanganagh Castle scheme as “significant”, especially as it is “the largest site so far in terms of cost rental” units.

More than half of the almost 600 houses in the scheme will be made available through the cost-rental option.

The development, located in south Dublin, is an important milestone in progressing the Government’s Housing for All policy.

Construction is now under way, with the first being available by the end of 2024.

All of the homes will be affordable, with 51 per cent cost rental, 15 per cent affordable purchase and 34 per cent social housing.

Cost rental is a new form of long-term sustainable home rental. It is targeted at middle-income households with incomes above the social housing limits, but who cannot afford to purchase their own home on the open market.