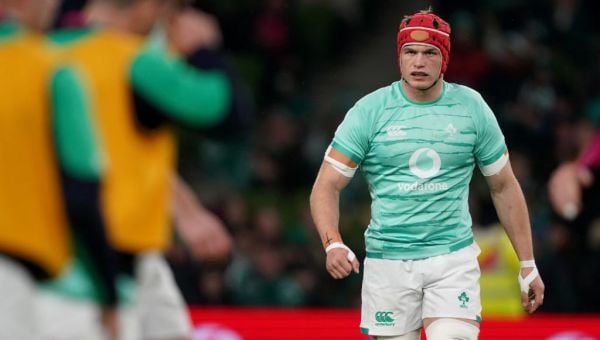 The 29-year-old started all 11 of his country’s Tests in 2022, scoring four tries, as they clinched a historic tour success in New Zealand, defeated world champions South Africa and took top spot in the global rankings.

He shared a table with ex-Springboks star Habana and former All Blacks duo Carter and Conrad Smith at the awards ceremony in Monaco, an experience which has fuelled his hunger.

“Even though I knew I was nominated, honestly it hasn’t really sunk in, but (I’m) feeling very honoured,” he said of the award, according to the Irish Rugby Football Union website.

“I was sitting at a table with the likes of Dan Carter, Bryan Habana, Conrad Smith, all these greats of the game.

“Chatting to them, it definitely drives you on to kind of not make it a once-off season that goes really well. You look at the legends of the game like them that have played to that top level for 15 years or so.

“So, that’s certainly going to drive me on. No doubt the way we’ve been pushed by the coaches in Ireland to perform and to try and improve, I think you’ve probably seen that in the individual performances as well as the team performance.”

Habana was named world player of the year after helping South Africa to World Cup glory in 2007, while three-time award winner Carter and Smith were world champions with the All Blacks in 2011 and 2015.

Van der Flier, who won his 45th international cap in Saturday’s 13-10 win over Australia, has ambitions of emulating those achievements by lifting the Webb Ellis Cup with Ireland next year.

“Team success is what you want at the end of the day,” said the Leinster man, who held off competition from compatriot Johnny Sexton, France scrum-half Antoine Dupont and Springboks centre Lukhanyo Am for the player-of-the-year award.

“I’m very grateful for the team that I’ve been fortunate to be a part of and how well we’ve done this year.

“They showed a highlights reel for the nominees, all my tries were set up by someone else or they were maul tries where everyone else did all the other work and I just put the ball down.

“It’s been one of those seasons where I’ve got on the end of a few, the bounce of the ball went my way.

“It was pretty cool to be even nominated alongside Lukhanyo, Antoine and Johnny as well. It was a very special moment to be announced as the winner.”

Van der Flier is only the third Irishman to receive the award following Keith Wood (2001) and Sexton (2018).