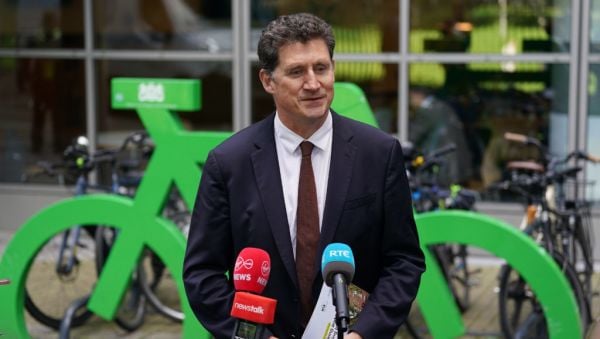 Minister for the Environment Eamon Ryan has said the State’s new climate plan will “deliver the scale of change” that is needed to hit its climate action targets.

Mr Ryan warned the measures contained in the plan will not be easy, adding that the scale of action needed to tackle climate change is “beyond compare”.

The Government’s Climate Action Plan is set to be published in two weeks and will include measures the State must take to meet its targets.

Mr Ryan made the comments after he returned from the Cop27 conference in Egypt.

Mr Ryan, who was appointed as the European Union’s lead negotiator in loss and damage talks at the climate summit, said the momentum is increasing for climate action.

He said the last-minute deal reached at Cop27 will protect the countries most vulnerable to climate change.

Speaking about the State’s updated action plan, Mr Ryan said it will contain more than targets.

“It will have real measures to deliver the scale of change we need. This will not be easy. The scale is beyond compare, but it’s going to be good for our country and it is what we have to do now,” he told RTÉ’s Morning Ireland.

“One good thing coming out of this weekend, even though we weren’t happy that we got a strong enough deal on the mitigation side, but the momentum is increasing for climate action and for addressing the issue around the world because it’s becoming ever more apparent that it’s the great issue of our time.

“I’m confident we can get this country to the top of the table if we take climate action now.”

Home! Team COP27IRL was at the heart of drafting, crafting and negotiating the historic #lossanddamage agreement – setting us on the path to protect and support the most vulnerable – already bearing the brunt of climate change. @COP27P @Dept_ECC ⁦@dfatirl⁩ pic.twitter.com/zvGUgfgTEA

Mr Ryan said the agreement reached over the weekend has to work.

The deal will create a fund for compensating poor nations that are victims of extreme weather worsened by rich countries’ carbon pollution.

Poorer nations have long called for funding because they are often the victims of climate-worsened floods, droughts, heatwaves, famines and storms despite having contributed little to the pollution that heats up the globe.

“A transition committee will look at the issue of how we get a range of different funding sources, how we reform perhaps most significantly the global financial system, the IMF (International Monetary Fund), the World Bank, the multilateral development banks, so that they provide better debt relief and financial flows for countries that are in difficulty due to climate,” Mr Ryan added.

“Secondly, that we broaden the base of countries who contribute, that the likes of China, Saudi Arabia, Qatar, countries that were back in 1992 designated as developing are now very wealthy and need to contribute.

“Thirdly, we need to protect the most vulnerable.

I’m so proud of the Irish civil servants Sinead Walsh, Jen Hobbs, Emer Griffin & Martin Collins who were centrally involved in drafting and negotiating the historic agreement on Loss & Damage at #COP27, as part of the European Union team. ⁦@dfatirl⁩ ⁦@Dept_ECC⁩ #bravo pic.twitter.com/9O5IcX1O7S

“We need to make sure that the funds that are raised are targeted and how we define that has to be worked out over the next year. It is very significant. It is historic.

“It has the potential, if we get it right now and deliver on the political promise, the mandate that’s been given to stitch climate justice into our entire response, and that was critical.”

He said the wording in the agreement will force countries like China, Saudi Arabia and Russia to pay their share.

“I believe the fund will be established under the Paris Agreement and the mechanisms there recognise that we’re in a different world to where we were back in 1992,” Mr Ryan added.

“Even if you start with the industrial revolution, and work through to the present day, China is one of the largest emitters.”