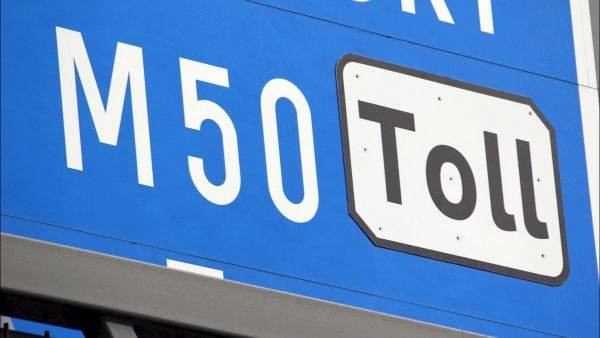 A total of 13 motorists have been hit with fines totalling €164,00 after they failed to appear in court and ignored reams of warning letters for repeatedly dodging M50 tolls.

However, despite being summonsed, the drivers did not attend the hearings, which went ahead in their absence.

Judge Anthony Halpin handed down fines ranging from €5,000 to €25,000, to be paid within six months. He also ordered them to pay €350 in prosecution costs.

Twelve of those issued with fines were regular private car owners, each with five sample counts for unpaid tolls from January to April.

The court imposed fines of €15,000 in seven cases, including a motorist who was sent over a thousand warning letters regarding 498 outstanding toll charges.

The judge noted the types of vehicles and their records of outstanding charges.

In each case, the judge heard the number of unpaid tolls and details of the level of engagement with the motorway operators. He also noted they failed to turn up for the proceedings despite being sent summonses.

TII could demonstrate which motorists made efforts to pay for some journeys, resulting in less severe fines for those drivers.

TII posted hundreds of warning letters to most defendants before bringing the court prosecutions, which can carry a potential custodial sentence.

The agency had certificates detailing the registered owners of the vehicles as well as pictures of them passing the toll gantry on specific dates.

Prosecuting counsel Edward Doocey BL, instructed by Pierse Fitzgibbon Solicitors, said the motorists were not in court, but Judge Halpin agreed to his application to proceed in their absence.

Counsel called on a TII witness to confirm each vehicle’s ownership records, the number of passages, and payment history.

The judge heard that most of the drivers did not engage with the transport agency, and some had recently ceased being owners of the cars subject to the prosecutions. However, TII could establish they were the owners at the time of the unpaid tolls.

The court can impose fines of up to €5,000 per charge and a six-month sentence. However, it remains the practice of the motorway authority to select habitual non-payers to face criminal proceedings.