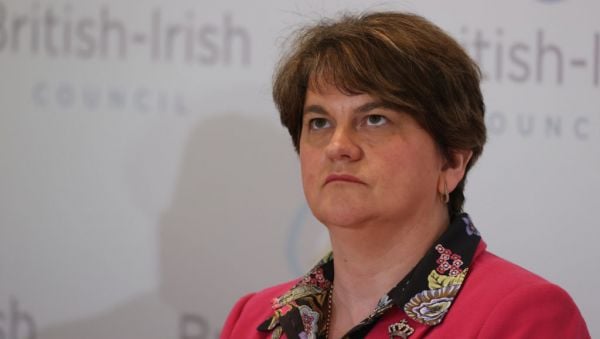 Sinn Féin vice president Michelle O’Neill has urged people to be civil in public discourse following an incident in which a woman chanted a pro-IRA slogan during an encounter with Arlene Foster.

Ms O’Neill reacted following comments from the former DUP leader suggesting incidents like this had become normalised because republican leaders said there was no alternative to past IRA violence.

The footage from the Local Women Business Awards in Belfast emerged on social media at the weekend,

In the video, a woman poses for a selfie with the former Northern Ireland first minister before starting to chant “Up the Ra!”, a pro-IRA lyric from the Celtic Symphony by The Wolfe Tones.

Ms Foster’s father, a reserve police officer, survived after being shot in the head by the IRA in 1979, and she was a teenager when a school bus she was travelling on was targeted in an IRA bomb attack in 1988.

In an interview with GB News, Ms Foster said such incidents had “become normalised because Republican leaders here in Northern Ireland said over the summer that there was no alternative to killing people during the Troubles”.

This referred to comments made by Ms O’Neill in an interview earlier this year when she said there was “no alterative” to IRA violence during Northern Ireland’s troubled past.

Asked about the incident at the awards ceremony during a visit to Derry, Ms O’Neill said: “We all have to be careful, sensitive, mature and civil in all of our public discourse. In everything we say because things do have implications and impact on people.

“I think we need to be sensible and clever about these things and I think that we need to be very mature about the political leadership we provide in this space.

“Whenever things are wrong, we say they are wrong and I think that’s the case in the incident over the last couple of days.”

Referring to Ms Foster’s comments about republican leaders normalising such incidents, Ms O’Neill said: “There are different narratives of the past and we all have to be sensitive to that but I also think in political leadership your job is to steer the course and to ensure we encourage civility in our public discourse in everything we do and say.

“We all need to be focused on the future. Let’s build a better future.”

Another day another sad video…What probably saddens and sickens me most is that the majority of those responsible for causing offence and deliberately causing hurt is that almost none of them grew up through the evil dark destructive days they glorify.

It was the latest controversy involving pro-IRA chanting this year.

Last month there was widespread condemnation after a video was posted on social media showing a group of passengers at Dublin Airport singing the lyric from the Celtic Symphony.

The previous week, a video showing members of the Ireland national women’s football team singing the same pro-IRA chant was condemned by victims of terrorism.

The Football Association of Ireland apologised for the video, which circulated online after Ireland qualified for the Women’s World Cup for the first time.

During the summer, footballer John Herron left Larne Football Club “by mutual consent” after he was pictured wearing a T-shirt bearing the slogan “Up The Ra”.