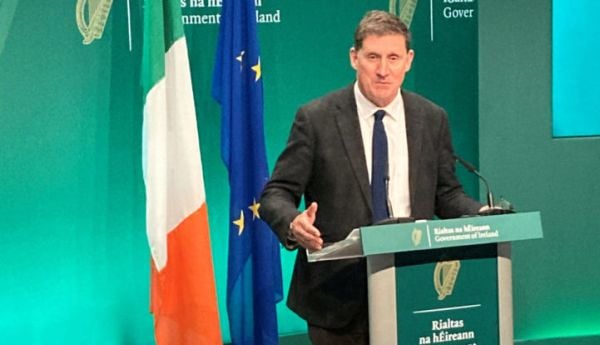 A new windfall tax on the energy sector aimed at reducing prices for households has been signed off by the Government.

Minister for the Environment Eamon Ryan described the tax on non-gas electricity generators as “fair, pragmatic and practical”.

The cap on market revenues will be set at €120 per MWh for wind and solar. It will be at least €180 per MWh for oil-fired and coal-fired generation.

Speaking at a press conference at Government Buildings, Mr Ryan said: “It’s a great, progressive, further, additional piece of the jigsaw that this Government has put into place to protect our people through this extraordinary high energy price period.”

It is expected to raise between €340 million and €1.9 billion for the Exchequer.

The move comes after an agreement by EU energy ministers on implementing the emergency levy in response to huge profits being made by energy companies.

The EU’s windfall tax aims to redistribute profits made in Europe’s energy sector amid a crisis fuelled by Russia’s invasion of Ukraine.

Tánaiste Leo Varadkar previously indicated that a tax on profits would be backdated to apply for the full year.

The EU has suggested that a temporary cap be placed on the revenues of electricity companies, which could raise €140 billion to help people hit hard by high energy prices.

The tax would work by placing a revenue cap on the price of electricity per megawatt hour, with the government collecting any amounts above that cap.

As part of EU plans, EU countries have also been asked to reduce energy demand during peak hours, with the aim of reducing overall electricity demand by at least 10 per cent until March 31st, 2023.

Under the Government’s one-off measures to help people with the rising cost of living, three €200 energy credits are being paid per household over the winter months.

Opposition parties have increasingly argued though that this will not be enough to insulate customers from spiralling energy costs as the winter months drag on.

Further details on how the windfall tax will work and how the revenues it raises will be distributed to those most in need will be unveiled post-Cabinet on Tuesday.