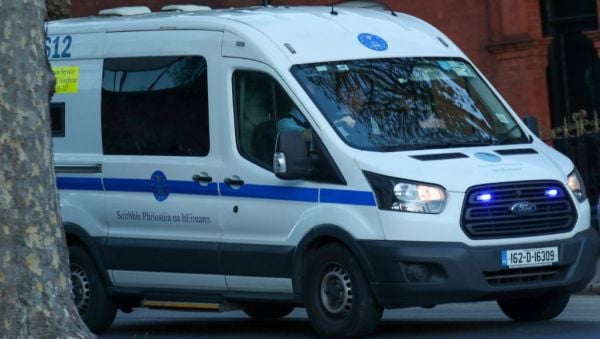 The Special Criminal Court has heard murder accused Gerard ‘The Monk’ Hutch tell ex-Sinn Féin Councillor Jonathan Dowdall that Daniel Kinahan looked “in a f**kin’ heap” from photographs he had seen in a newspaper after the Regency Hotel attack.

Mr Hutch was also recorded telling Dowdall that the “cops are going around like headless chickens” and that “loads of f**k ups have after been made” in the aftermath of the murder of Kinahan Cartel member David Byrne (33) during a boxing weigh-in at the hotel.

The trial of Mr Hutch has also heard that the two men also discussed many topics including celebrities.

The accused man Mr Hutch was heard telling Dowdall that “these three yokes we’re throwin’ them up”, in what the prosecution has said is a reference to giving the three assault rifles used in the Regency Hotel attack torepublicans in the North.

Mr Hutch can also be heard saying: “There’s a present them three yokes” and that he wanted “to throw them up there to them as a present”. The accused also said he had to “push them” to get “them outta the village”.

Mr Hutch was also recorded as saying: “Twelve months time, there’s two RUC men dead there and them things are ballistically traced”. Dowdall replies: “They’re gonna blame them on the Regency” and “any smart copper would be saying it’s a joint yoke”.

The non-jury court also heard the two men discuss convicted IRA killer Pearse McAuley and Mr Hutch can be heard telling Dowdall that him and McAuley “go back a bit”. Dowdall tells Mr Hutch that he [Mr Hutch] is “friends” with Pearse and says: “Pearse said all along if you ever needed” and “Pearse would ring them and all if you want Gerard”.

In another clip, the court heard Dowdall talking about the components for a bomb including a detonator. Dowdall can be heard saying: “you can get a det”, “the electrical pulse that goes into that makes a chemical reaction and that’s what sets it off” and “the det that goes into the plastic, so ya still need my mechanism”. Mr Hutch says “just a ball of bleedin’ putty”, “where you get that coil” and “what about the rubber stuff”.

The court also heard Mr Hutch and Dowdall speaking about a “peaceful process” when they were approaching Lisburn town centre. Mr Hutch said he wanted to “see what these are willing to do” and Dowdall replied, “but how can you trust them?”

Dowdall went on to say “I know you bleedin’ trust me,” and warned Mr Hutch about getting complacent or relaxed following a peace deal.

Dowdall said there’s “too many of them” and that “them Kinahan’s are a big f**king army.” Mr Hutch referred to the murder of his brother Edward “Neddy” Hutch a month before, saying: “The c**ts who done Neddy have to f**king go.” He referred to them as “just f**king hitmen” and added that the “shooting has to stop” and that the IRA “would have to be at the meet”.

At the non-jury court on Tuesday, the prosecution played the beginning of an audio recording of a conversation between Mr Hutch and Dowdall while they were allegedly travelling north to a meeting in Strabane in Co Tyrone around 2.23pm on March 7th, 2016 in Dowdall’s Toyota Land Cruiser, that had been bugged by garda detectives.

Transcripts of the recordings, which are being relied on by the prosecution, are being displayed on several screens in the courtroom and have been described as “part of the core” of State’s case in the trial of Mr Hutch (59), last of The Paddocks, Clontarf, Dublin 3, who denies the murder of Kinahan Cartel member David Byrne (33) during a boxing weigh-in at the Regency Hotel on February 5th, 2016.

Last week, the three judges ruled that they would listen to the 10 hours of conversations between Mr Hutch and Dowdall that were captured by gardaí, despite having heard that Dowdall’s bugged vehicle had been outside of the State during the majority of the recordings.

Mr Hutch’s defence lawyer Brendan Grehan SC has submitted that their “core argument” would be that gardaí were aware that Dowdall’s jeep was outside the jurisdiction for eight of the 10 hours of those recordings from March 7th, 2016 and that the evidence harvested from that “illicit fruit” should be excluded from the trial.

The non-jury court will hear the 10 hours of audio recording which begin at 2.20pm on March 7th, 2016 leading into the early hours of March 8th. After this the court will hear full legal argument from counsel on both sides as part of a ‘voir dire’ – a ‘trial within a trial’ – before the three judges rule on the admissibility of its contents having regard to the extraterritoriality issue.

The Special Criminal Court has viewed CCTV footage of what the State says is Mr Hutch making two separate journeys to Northern Ireland with Dowdall on February 20th and March 7th, 2016, just weeks after Mr Byrne was murdered.

CCTV footage has been shown to the court of Mr Hutch getting into the front passenger seat of Dowdall’s Land Cruiser at 2.23pm on March 7 at Kealy’s pub of Cloghran on the Swords Road. Further CCTV footage showed the vehicle at the Maldron Hotel in Belfast at 5.35pm that evening. Another clip showed the vehicle returning to Kealy’s car park at 00.15 in the early hours of the morning on March 8, where Mr Hutch gets out of the Land Cruiser and into a BMW.

The State’s case is that Mr Hutch had asked Jonathan Dowdall to arrange a meeting with his provisional republican contacts to mediate or resolve the Hutch-Kinahan feud due to the threats against the accused’s family and friends.

Mr Byrne, from Crumlin, was shot dead at the hotel in Whitehall, Dublin 9.

Mr Hutch’s two co-accused – Paul Murphy (59), of Cherry Avenue, Swords, Co Dublin, and Jason Bonney (50), of Drumnigh Wood, Portmarnock, Dublin 13, have pleaded not guilty to participating in or contributing to the murder of David Byrne by providing access to motor vehicles on February 5th, 2016.