Thousands of empty seats in opening games at Qatar 2022 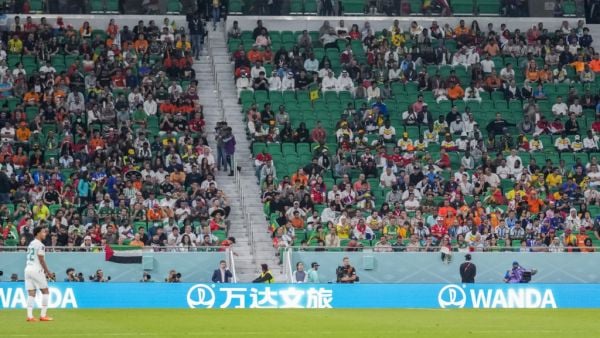 Significant numbers of empty seats could be seen at two of Monday’s World Cup matches in Qatar.

The chief executive of Fifa World Cup Qatar 2022 said the country was “gripped by football fever” following Sunday’s opening ceremony but around a third of seats appeared unoccupied throughout Senegal’s match against the Netherlands at Al Thumama Stadium.

Fifa did not immediately know why this was the case, but it is understood problems with the ticketing app which affected England fans gaining entry to the match against Iran also occurred at the Senegal-Netherlands match.

10 minutes to kick off in attractive ⁦@FIFAWorldCup⁩ fixture between Senegal and the Netherlands at Al Thumama, and ground looks roughly half full. Maybe it will change in last few minutes. pic.twitter.com/PmUQO2I7rQ

At the England match at the Khalifa Stadium, thousands of empty seats could be seen at kick-off but the venue did gradually fill up.

The official attendance of 41,721 for the Senegal match raised eyebrows as well, with the venue listed as having a 40,000 capacity in the official pre-tournament media guide.

However, the final capacity during event mode is higher for each of the eight stadia – with Al Thumama now able to hold 44,400 according to Fifa. However, that still did not explain the empty seats which could be seen.

There was similar confusion on Sunday night when the official attendance at Al Bayt Stadium was over 67,000, with the media guide stating capacity was 60,000.

That stadium in Al Khor was virtually empty by full-time as hosts Qatar succumbed to a 2-0 defeat to Ecuador.

Fifa says almost three million tickets have been sold for the finals altogether.