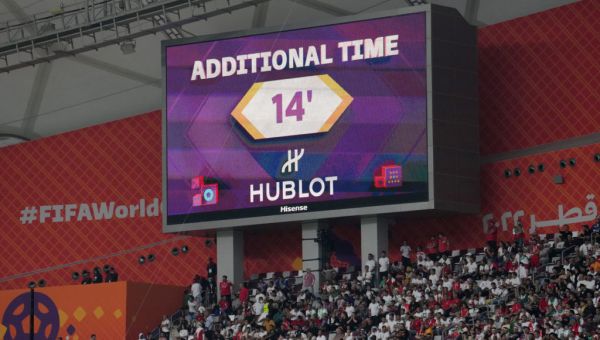 Monday’s matches at the World Cup in Qatar lasted over 100 minutes each after Fifa’s pre-tournament instruction to maximise playing time and cut out time-wasting.

England’s match against Iran featured an incredible 27 minutes of injury time, with the serious head injury suffered by Iranian goalkeeper Ali Beiranvand accounting for a decent chunk of it.

Fifa is making a concerted effort to clamp down on wasted time at these finals, as it did at Russia in 2018.

Pierluigi Collina, the Italian who chairs Fifa’s referees committee, said last Friday: “We recommended our referees to be very accurate in calculating the time to be added at the end of each half to compensate the time lost.

“What we want to avoid is matches lasting 42, 43, 44, 45 minutes of active play. This is unacceptable. Whenever there will be an incident like an injury treatment, substitution slot, a penalty kick, a red card, a celebration of a goal…

“A celebration may last one, one and a half minutes, so imagine in a half there are two or three goals scored, so it’s easy to lose three, four, five minutes just for goal celebrations. This time has to be considered and compensated at the end.

“And of course, the time lost to VAR intervention by the way.”