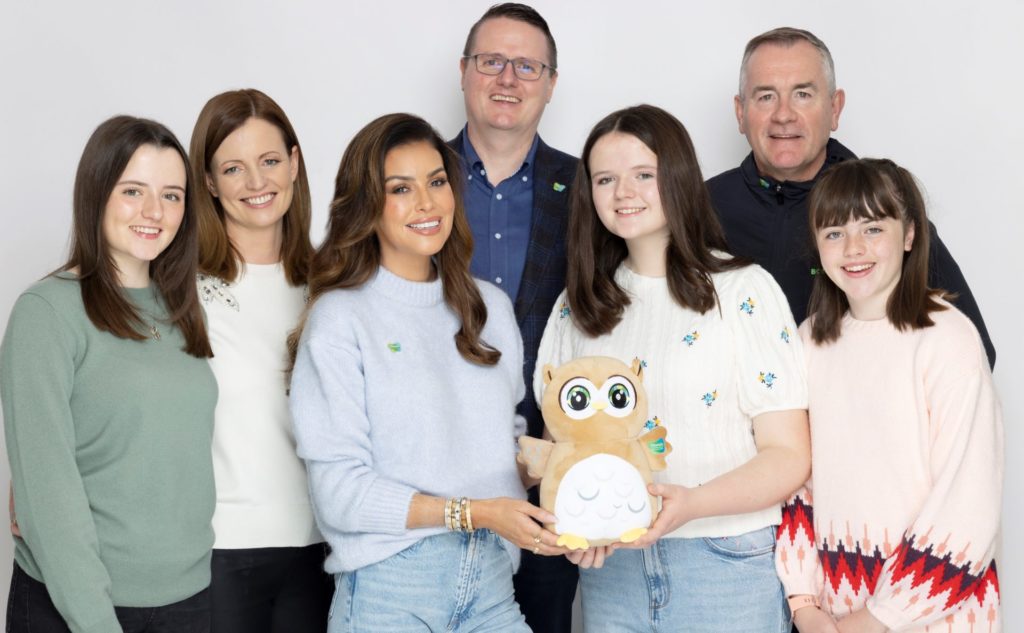 Carlow-based chartered physiotherapist Maurita Delaney was instrumental in the concept of Rory, a very innovative owl toy developed by Dunnes Stores, which helps children to manage their anxiety by teaching them a unique breathing meditation. Last week, television presenter and businesswoman Suzanne Jackson joined the CEO of Cliona’s Foundation Brendan Ring along with Maurita, her husband Eric and their daughters Sarah, Keeva and Jane to launch the wonderful Rory.

Rory is already a huge hit with shoppers, with 100% of the proceeds of this partnership going to Cliona’s Foundation, as Dunnes has kindly supported the cost of developing Rory.

The inspiration for the owl came from Maurita, who had first-hand experience of the impact of anxiety on children. As a chartered physiotherapist she was seeing several children present to her practice with physical issues, but it became clear to her that the underlying issue was anxiety. Maurita came up with the concept of a toy a child could bring to bed and help to settle their mind. The owl’s eyes can be used as a tool to teach children to focus on deep-belly breathing before sleep, giving children a tool to help manage anxiety.

Maurita and Cliona’s Foundation brought the idea of Rory to Dunnes Stores, which loved the concept, while Suzanne Jackson was delighted to become an ambassador.

The sleep story is a fun, guided meditation tale, which can be downloaded for free from the Cliona’s Foundation website and will go ‘hand in hand’ with the owl and teach the breathing technique. Once you buy Rory, visit clionas.ie to download your free story, which is voiced by Suzanne. The sleep story was written by Maurita’s daughter Sarah, with input from her sisters and cousin.

Rory has winged his way to Dunnes Stores nationwide just in time for Christmas.