NAOMH Eoin’s U20 footballers had to wait 11 months before finally getting the chance to beat Palatine and lift the 2021 ‘B’ Football county title last Saturday night but manager Andy O’Brien wasted no time after the game in dedicating the win to the team’s joint captain Oisin Kelly.

Oisin lost a leg as he battles against cancer but had a smile as wide as the River Slaney as he lifted the trophy with fellow captain Ciaran Abbey – and O’Brien said that Oisin has been an inspirational figure for the players taking to the field. 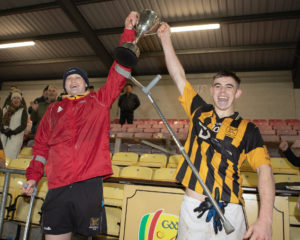 Joint captains Oisin Kelly and Ciaran Abbey raise the 2021 Stryve sponsored U20 B cup after their win over Palatine.
Photo: Thomas Nolan Photography.

“He’s an inspiration to us all, we wanted to get the cup back for him. Whether it was 11 months ago or now, it’s huge for the club to get it back for Oisin. He’s going through a cancer battle and lost his leg. He was playing with Myshall with this group underage and he’s a huge part of the club. He’s always part of the team, he comes to training, he’s at every match. We wanted to do it for him,” said O’Brien.

The squad had to wait a long time for the chance to win the trophy for Oisin but O’Brien said it was worth it all that time just to get the opportunity to savour the 1-8 to 0-7 victory.

“It’s been a long wait, last year we fought hard and we deserved to get to the final and we had to wait a long time, but in fairness to the lads, they’re such a dedicated bunch. We knew our time would come, we knew it would be tough, Pal are a serious side and they put it up to us right until the last minute. It’s huge for the club, we got to the last few Intermediate finals and lost so it’s great for the youths to bring something home. We always believed the match would be played and we always thought we’d have a good chance judging by how we got on last year. It’s a lot sweeter having had to wait so long. It’s great to get it, I know it’s for last year but it doesn’t change a thing,” he said.