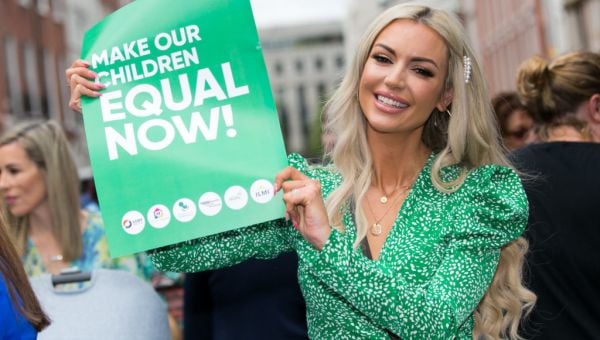 Rosanna Davison has said she is “deeply grateful” as she celebrated the third birthday of her daughter Sophia, who was born via gestational surrogate.

She has spoken about her fertility problems on a number of occasions, along with the lack of legislation around surrogacy in Ireland.

Sharing a picture of herself and newborn Sophia, the 38-year-old wrote: “The moment I became a mum and held our newborn daughter for the first time this day three years ago, after what had been a rollercoaster of a surrogacy journey. Words can’t describe the joy and exhilaration!”

She added: “Feeling deeply grateful to live in a world where medical and reproductive science has made surrogacy possible (and so many other kinds of fertility treatments), that there are remarkable women like @berezan94anastasia willing to help others make their family dreams come true, and that safe, regulated surrogacy with equality for Irish children born through international surrogacy is imminent. This is about children like my genetic daughter being granted the same legal rights as her brothers and me finally being rightfully recognised as her legal mother.”

International commercial surrogacy is set to be regulated in Irish law, giving legal rights to mothers, including Ms Davison, after years of campaigning by advocate groups such as Irish Families Through Surrogacy.

Sophia’s gestational surrogate Anastasiia Berezan arrived in Ireland in May as Ms Davison and Mr Quirke offered shelter to her and her family amid the ongoing war in Ukraine.

The former Miss World had previously spoken about her worry for Ms Berezan amid the Russian invasion of Ukraine.

Ms Davison said Ms Berezan had given her and husband Wes Quirke “the greatest gift of all” and “now it is our turn to help her”.

It took two months for Ms Berezan and her family to escape Kherson City in south Ukraine, but they have finally arrived in Ireland through Poland after a “huge logistical challenge”.

In a social media post at the time, Ms Davison wrote: “She gave us the greatest gift of all, and now it was our turn to help her. It took two months to finally escape Kherson City in the south of Ukraine and it was a huge logistical challenge to get them from Poland to Germany and then to Ireland with their Husky! But we did it with the help of some very generous, compassionate people, including my wonderful parents.”