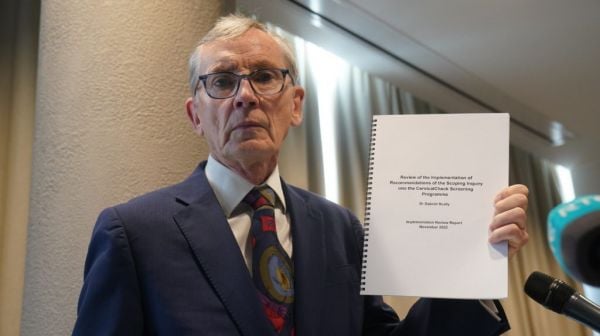 There is “unfinished business” and “serious work to be done” around the area of open disclosure in the State’s healthcare system, Dr Gabriel Scally has said.

Publishing his 39-page report on the implementation of recommendations from his 2018 scoping inquiry into the Cervical Check screening programme, Dr Scally said issues remain around resolution and other areas.

He said that there is still a lot of work left to do around open disclosure and achieving resolution.

Dr Scally said the treatment of some women in the healthcare system remains “completely unacceptable”.

He was also critical of healthcare staff who have claimed in the past that CervicalCheck was as good as any other cervical screening programme in the world, describing the comments as “entirely reprehensible”.

“If you can’t bring yourself to acknowledge past failings, why would anyone trust you today? Some of the things that have been extraordinarily hurtful and damaging,” he said on Wednesday.

He said some of these attitudes are “still prevalent” in the health system, and that the treatment of some women remains completely unacceptable.

Dr Scally was tasked with reviewing the cases of more than 200 women who were not informed that their smear test results had produced false negative results.

Assessing the progress made in implementing his 50 recommendations, Dr Scally said: “The whole area of open disclosure I think is unfinished business.

“There is work to be done and some serious work about the whole way in which things are dealt with.

“We have issues around resolution, clearly in terms of how to deal with these things.

“The court system is not the right place to achieve a resolution that is imbued with grace and compassion.

“I think there is a lot to be done still there and I’ve been very moved by some of the women involved.

“Some of them are now dead and took it into their own hands to achieve resolution by sitting down with the consultants, that they had a legitimate grievance about their behaviour in terms of non-disclosure and discussing that with them face to face, and hearing and exchanging views and hearing how each of them felt.

“I know that made a difference. We need to engage much more and facilitate much more that form of resolution.

“The whole area of open disclosure which of course was at the very centre of the cervical screening problem, where the poorly designed audit results in some women not being disclosed as they should have been.

“The current policy within the HSE, in place since June 2019, is an interim revision of the previously deeply unsatisfactory policy.

“It isn’t easy to see how, as presently constituted, the Bill, if it becomes an Act, will move the system forward to the extent needed.

“The underlying concern must be that there is no fully formed plan to fundamentally change how patients are dealt with and regarded within the health services.

“One of my recommendations in 2018 was that the Medical Council should put into effect its stated support for the concept of a duty and culture of candour by insisting that doctors ‘must’ be open and honest with patients rather than using the word ‘should’, which leaves it to the doctor’s judgement as to what, if anything, happens.

“Unfortunately the working in the Medical Council guidelines remain unchanged.

“We should start on the basis that we expect all of our health professionals in this country to be open and honest when an error has happened.

“The regulatory bodies need to waken up to that and I’m disappointed that since my first report came out, that that word remains as ‘should’, that open disclosure remains for the Irish Medical Council a discretionary matter.

“There is no discretion in my view.”

He also said it was “extraordinary” that there remains a legal prohibition on anybody making a complaint to the HSE about the clinical judgement of a doctor or other health professional providing care funded by the HSE.

The legal prohibition remains as part of the Health Act 2014.

“I’ve never come across that and I was astounded and I checked it multiple times, of anywhere else where there’s a law prohibiting people from making a complaint to the health of their health service provider.

“An adequately constituted clinical complaints system is one thing that might help address the serious problem of patients being left with no choice but to take legal action if they are concerned that their clinical care may have been deficient.”

“That’s precisely what I mean by candour,” he added.