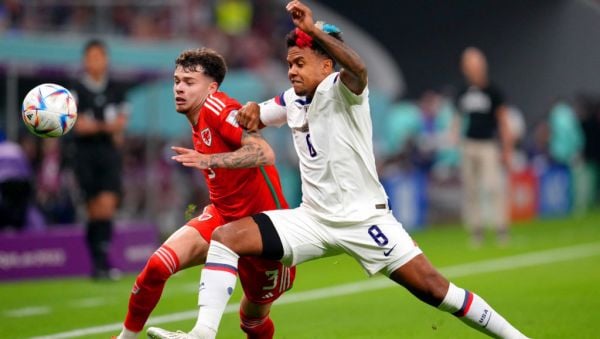 Harry Wilson has praised Neco Williams’ “courage and bravery” for playing in Wales’ World Cup opener on Monday following the death of his grandfather.

Williams’ grandfather died on Sunday and the Nottingham Forest full-back shared the sad news on social media after playing in Wales’ 1-1 draw against the United States.

“Yesterday was the toughest news I’ve ever had to face and that was listening to my mum tell me my grandad passed away last night,” Williams wrote on Monday night, dedicating the game and point to his late grandfather.

Yesterday was the toughest news I’ve ever had to face and that was listening to my mum tell me my grandad past away last night😓 to go from crying all day to start in a World Cup game was extremely tough but I got through it from the support of my team mates and family❤️🕊 pic.twitter.com/3pcxl0C3Qc

“To go from crying all day to start in a World Cup game was extremely tough but I got through it from the support of my team-mates and family.”

Wilson is particularly close to Williams, having been with him at Liverpool and Fulham. The pair helped the Cottagers into the Premier League last season during the latter’s loan spell at Craven Cottage.

“Everybody knows to lose a family member is never easy. For that to happen on the eve of his first ever World Cup game…and to put in a performance like that as well, I thought he was fantastic.

“The lads got around him and tried to make him feel as comfortable as possible.

“He had a lot of emotion after receiving the news less than 24 hours before the game, but I thought his performance was great.”

Wales play Iran on Friday before concluding their group games against England on Tuesday.

Joe Allen trained with the full squad on Wednesday as he seeks to be fit in time after being out for two months with hamstring damage.

Kieffer Moore is likely to lead the Wales attack after his half-time introduction against the USA led to a vastly-improved second half performance and, ultimately, Gareth Bale’s equaliser from the penalty spot.

Wilson said: “The game was perfect for Kieffer to come on at half-time. He gave us that platform to build and play off him.

“The next game may be perfect for DJ (Daniel James) or Brennan (Johnson). We’re lucky with the forwards we have.

“I’d say this is a must-win game now after starting off with a solid point.

“Now we’ve got that point on the board, we’re going into Friday’s game to get the win. Hopefully we do that and then focus on the England game.”

Iran’s opening game – a 6-2 defeat to England on Monday – came amid a backdrop of political tension in the country and anti-government protests following the death Mahsa Amini.

The 22-year-old had been detained by police in the capital, Tehran, for allegedly not adhering to the country’s strict Islamic dress code.

Iran’s players stood in silence during their country’s national anthem before the England game, action that was viewed as a stand of solidarity with those being mistreated, imprisoned and killed while protesting for gender equality in the country.

Wilson said: “We’re aware of stuff going on over there and we support them.

“But when it comes to the game we’ll just be focused on the football side of things.”