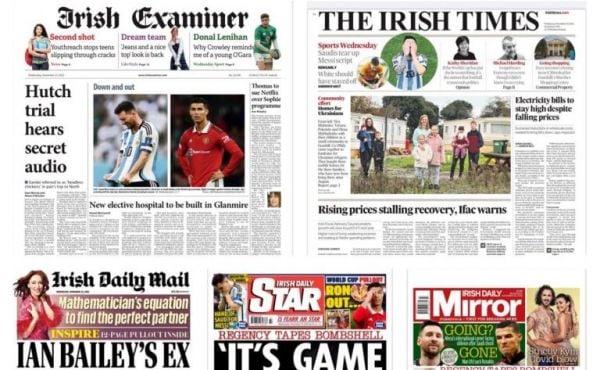 A report on the Irish economy, the Gerry Hutch trial, and huge demand for flights are among the stories on Wednesday’s front pages. 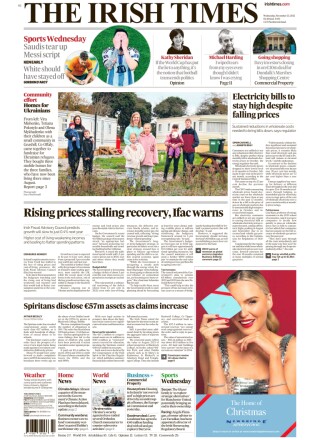 The Irish Examiner leads with the Gerry Hutch trial. 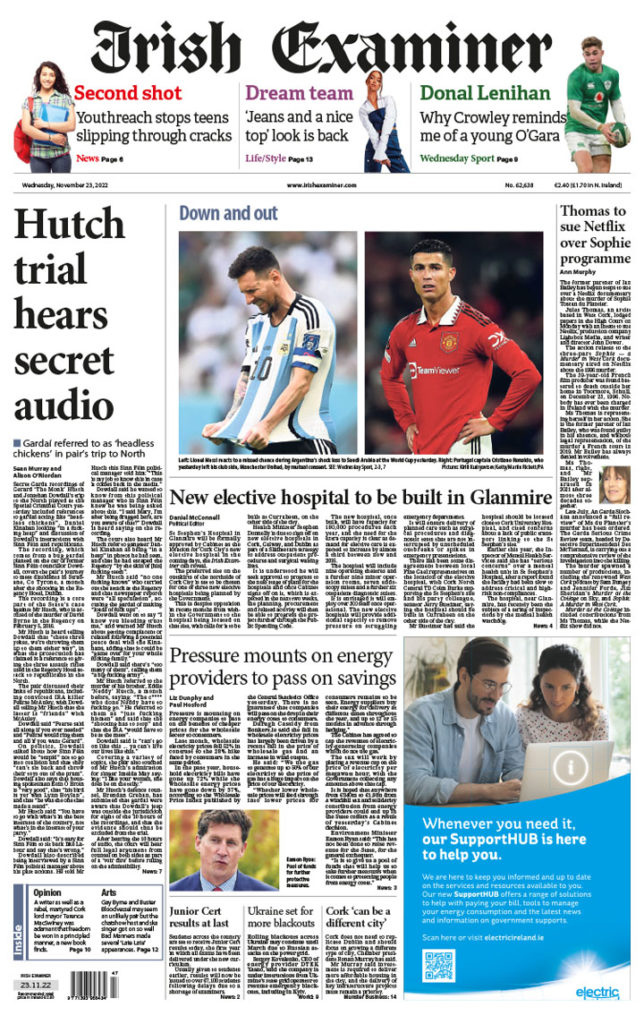 The Irish Independent leads with a story on a boom in demand for flights from Dublin Airport. 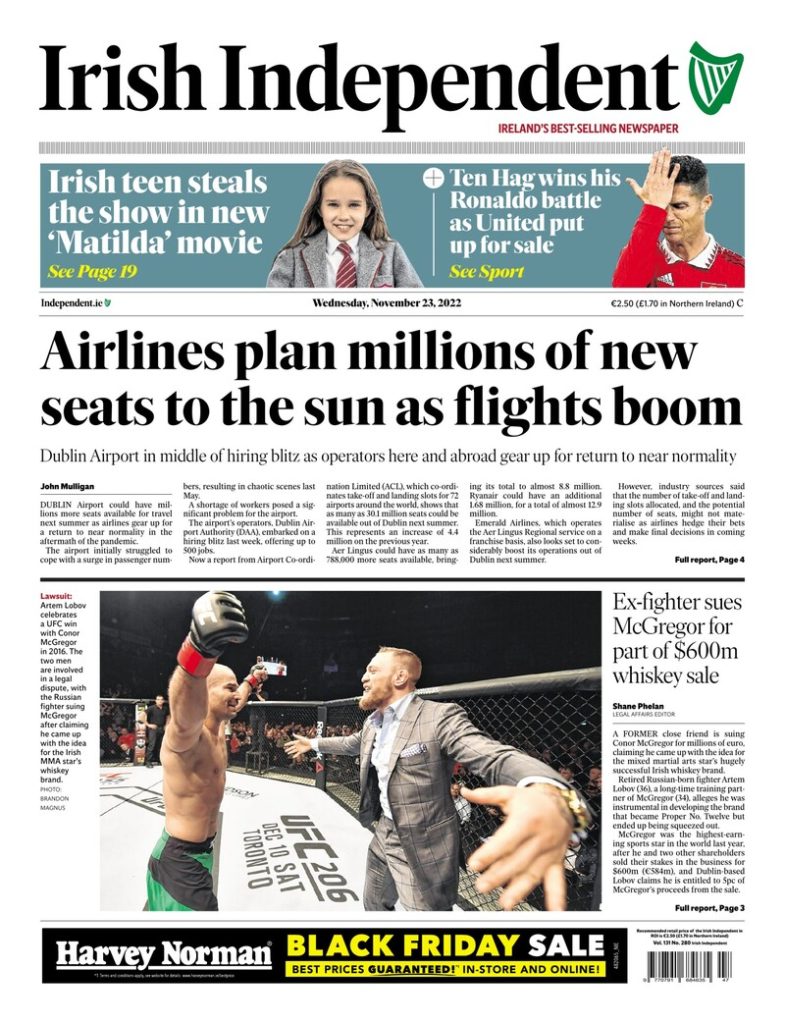 The average rent for a home in Cork City is now €1,708, according to The Echo. 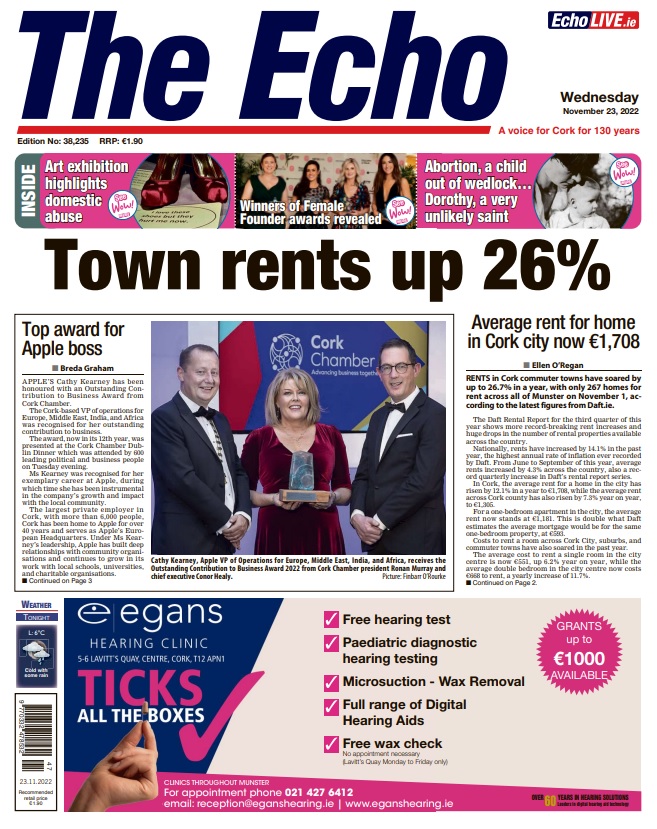 The Irish Daily Star and Irish Sun lead with the Gerry Hutch trial.

Ian Bailey’s ex Jules Thomas is suing Netflix over their portrayal of her in a documentary, the Irish Daily Mail reports.

For all this and lots more, pick up a copy of Wednesday’s Irish Daily Mail. pic.twitter.com/jGFuKe2Czg

Conor McGregor’s former Straight Blast Gym (SBG) teammate Artem Lobov is suing him over claims that he helped to come up with the idea for his ‘Proper Twelve’ whiskey, according to The Herald. 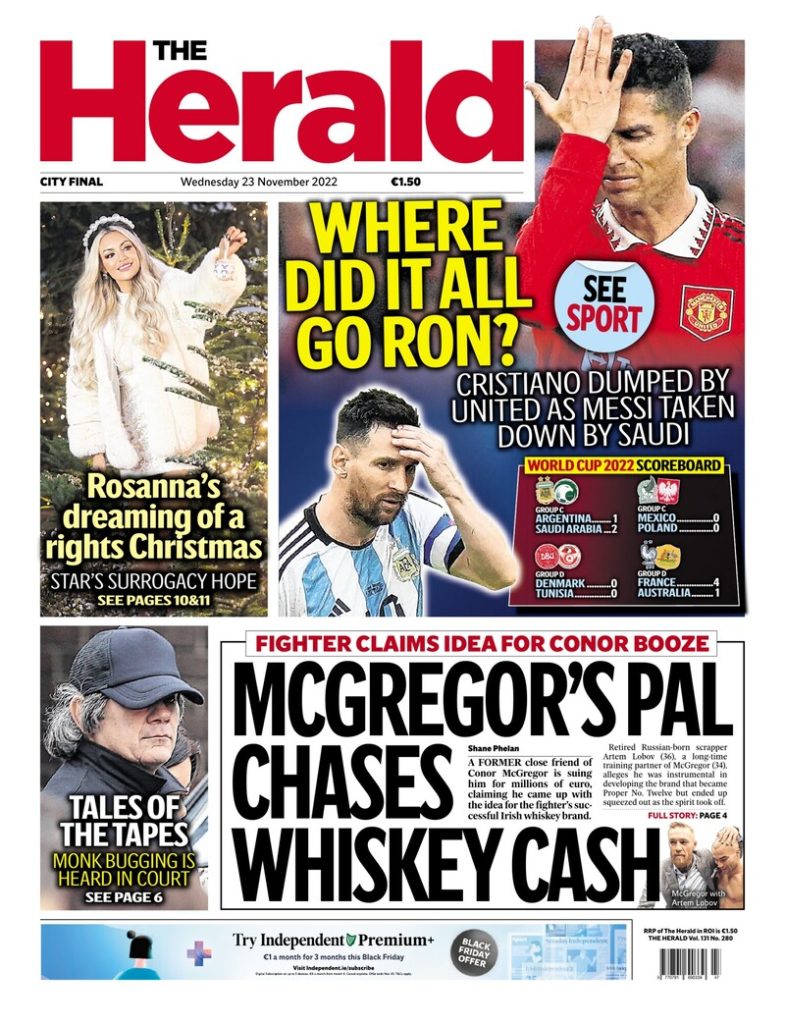 In the North, the Belfast Telegraph leads with a story on an investigation into the maternity unit at a hospital in the city after the death of a second baby. 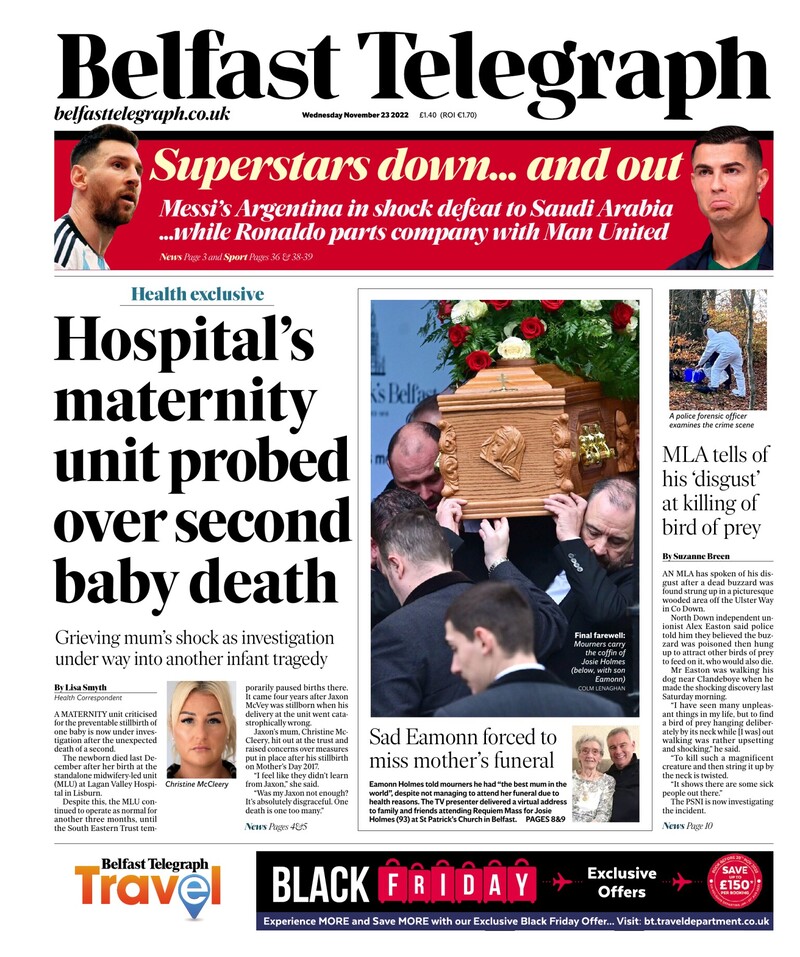 The Irish News leads with a story on a car bomb threat against a ‘prominent republican’.

Many of the midweek UK papers react to more looming strikes by the rail union.

Metro, the Daily Express and the Daily Mail accuse union boss Mick Lynch of trying to ruin Christmas with the industrial action.

Elsewhere, The Times reports that the NHS is “picking up the tab” of the online betting industry, with a surge in suicidal gambling addicts turning up to A&E.

Menopausal women working in the NHS will be able to work from home if their symptoms require it, The Daily Telegraph says.

The Guardian carries a warning from doctors that poverty is forcing sick people to keep going to work.

The Independent splashes with the Christmas appeal it has launched to help people during the cost-of-living crisis.

The UK prime minister has been forced to back down over proposed amendments to the Levelling Up Bill, the i reports.

Wednesday’s front page: Rebels force Sunak to back down on housing#TomorrowsPapersToday pic.twitter.com/g44s94i9ZF

The Financial Times writes that the founder of the cryptocurrency exchange FTX used it as his “personal fiefdom” before its implosion, a court has heard.

The Sun has Britain’s King Charles presenting its “Who Cares Wins” award to a “brave doctor”.

The Daily Star splashes with Argentina’s loss to Saudi Arabia at the World Cup.

And the Daily Mirror says Fifa have reportedly reminded Qatar they must allow rainbow symbols to be worn at the World Cup after security officials stepped in to remove them from fans.