Windfall tax will not curb investment in renewable energies — Varadkar 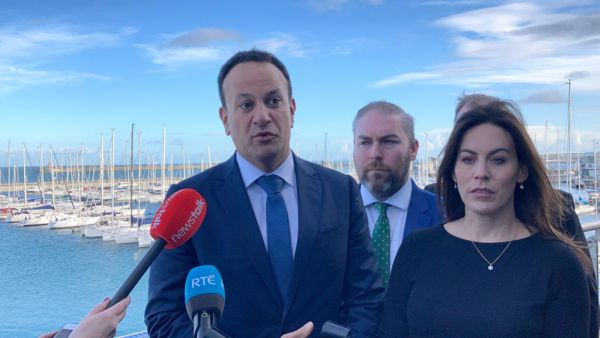 The new windfall tax on energy firms will not deter investment by private companies in renewable sources, the Tánaiste has said.

Leo Varadkar added that the Government had considered the impact a revenue cap on profits made by non-gas energy generators would have on investment in the area.

He also said it was “too soon” to make a call on how to distribute the funds raised through the cap to households struggling with the rising cost of living.

The Fine Gael leader made the comments at the launch of a new partnership between semi-state energy company Bord na Mona and Ocean Winds, one of the largest international offshore wind energy generators.

It came after Cabinet ministers agreed on Tuesday to cap the revenues of electricity generating companies that do not use gas.

The tax will place a revenue cap on the price of electricity per megawatt hour (MWh), with the Government collecting any amounts above the limit.

Ministers also agreed a plan to get fossil fuel-producing companies to pay a temporary solidarity contribution.

The Government said the fund raised by the measures will be used to protect households against rising energy costs.

Asked whether he had concerns that the windfall tax could curb investment in renewable energy Mr Varadkar replied: “We wanted to make sure that it was high enough that wind generators, those who generate power from wind and solar, would still be sure of a decent profit and a good return on investment. And that’s crucially what it’s all about.

“But we’re in a very strange situation where, because of the price of gas, solar farms, wind farms were making profits and getting revenues that they never imagined even in their own business plans that they would be able to secure and we don’t think that was right.

“And that’s why we capped the amount of profits they can make. And all of that money will be recycled in order to bring down electricity bills for businesses and consumers.”

The Enterprise Minister said one of the advantages of the tax is that it gives the Government additional resources.

“We can use that to provide further help for households and businesses next year,” the Dublin West TD said.

“But it’s too soon to make that call now. We need to see where we stand in terms of energy prices, whether they’re going up or down or staying the same.

“And we also need to see where we stand economically more broadly, so we can’t make that decision at this stage.”

The Tanaiste described the joint venture between Bord na Mona and Ocean Winds as “really significant”, adding offshore wind energy is the “way of the future”.

“This is a really positive announcement,” he said.

“We’ve made so much progress when it comes to renewable energy onshore, but the future is offshore.

“And that’s the next big step, allowing us to produce most of our power from renewable sources and all of the benefits that come with that, both in terms of energy security, price stability, and also jobs and investment all over the country.”

The Ocean Winds and Bord na Mona venture aims to identify and develop offshore wind energy opportunities around the coast of Ireland.

The projects have the potential to generate up to 2.3 gigawatts of clean and renewable electricity to power up to 2.1 million homes by 2030.