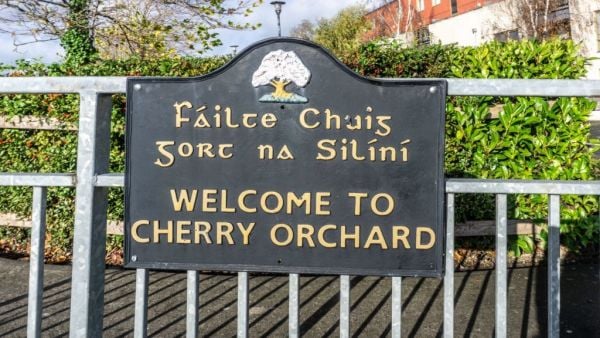 A Cherry Orchard group has been set up to help co-ordinate and intensify support for the south Dublin suburb near Ballyfermot.

It comes after a Garda patrol car was repeatedly rammed in the area in September, with bystanders cheering in a clip widely shared on social media.

Politicians condemned the incident, but some argued the Government has let down and neglected several generations in the Cherry Orchard community.

The new group comes after ministers met with community representatives in recent weeks.

Minister for Justice Helen McEntee and Minister of State for Law Reform James Browne announced the Cherry Orchard Implementation Board (COIB) on Thursday.

Delighted to be in Cherry Orchard this morning to welcome @HMcEntee & @JamesBrowneTD as they announced a new Cherry Orchard Implementation Board who will support the organisations, groups and community activists as they bring to reality the plans for this super #community pic.twitter.com/FDKtruZ5Pc

It will be part of a cross-government initiative, led by the Department of the Taoiseach, to examine disadvantaged communities and “how best to intensify the interventions” if needed.

Mr Foster will work with Government departments and agencies to progress projects and initiatives, with the aim of improving safety and wellbeing.

The Department of Justice and Dublin City Council will work with Mr Foster over the coming weeks to identify members and supports needed for the COIB.

Recent support given to the community includes €123,200 to the equine centre and €135,000 to the That’s A Wrap project from FamiliBase, which serves the Ballyfermot area.