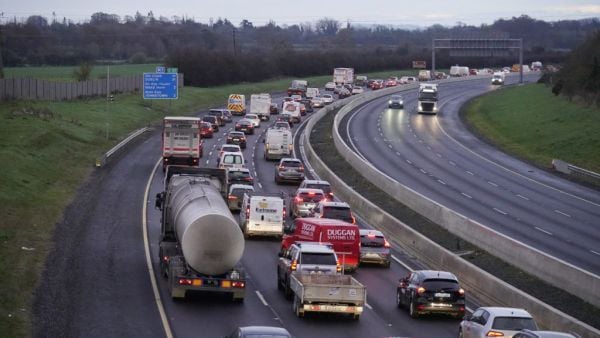 Toll road increases will be a “massive blow” to commuters and will disproportionately affect those living in rural areas, the Dail has heard.

Sinn Féin’s Pearse Doherty called on the Government to intervene to prevent the price hikes being implemented.

Tánaiste Leo Varadkar said the Government is trying to find a way to mitigate or defer toll increases.

“This is a massive blow to workers and families coming at a time of record fuel prices,” Mr Doherty told the Dail during Leaders’ Questions on Thursday.

The operator of the M3 recorded €11m in operating profits last year but now they want to increase tolls to the MAXIMUM!!!!

These roads are a direct result of gold-plated Fianna Fáil era contracts. Enough is enough. Govt must insist that the proposed toll hikes DO NOT go ahead. pic.twitter.com/RnXSRPIFX5

“These toll road prices increases are going to really hurt, and they’re really going to hurt commuters. These charges will disproportionately impact on those living in rural areas who are forced to use a private car because they don’t have the options of public transport.”

The Donegal TD accused the Government of failing to address the matter urgently.

He said: “It is not lost on people that their wages don’t go up in line with inflation, but the government has ensured through these contracts that the profit of toll operators do.

“These firms aren’t struggling to get by and these increases are all about protecting private profit. So the Government needs to intervene.

“They need to bring all the pressure that they can to bear on the operators and Transport Infrastructure Ireland (TII) in particular. These increase should not go ahead.”

He also said Junior Minister Hildegarde Naughton told an Oireachtas committee earlier this week that the department was aware of the issue as early as September.

But he said the rules around tolls work differently depending on whether the toll or bridge is under the control of the Government or not.

“There hasn’t been an increase in tolls for nine years because inflation was very low, but now that inflation is very high that increase kicks in,” he said.

“It’s proposed to impose it on motorists from 1st of January.

“But just because the maximum toll is set at a certain level doesn’t mean it has to be applied.”

He added: “What we’re trying to do over the course of the next few weeks, is to see if we can find a way to mitigate the impact of that for motorists.

“But we are working with TII, working with the Department of Transport, to see if we can do something to mitigate or defer that increase.”

But he said he “cannot” give a cast-iron commitment because contracts are involved.

In response, the Sinn Féin finance spokesman said it was only because of “public outrage” that the Government was examining the matter.

Mr Varadkar added: “We have a bit of time, we are working on it.”