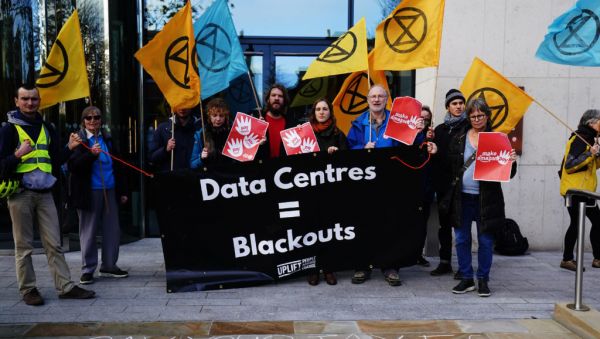 Protesters gathered outside Amazon’s European headquarters in Dublin as part of an international campaign to coincide with Black Friday sales.

Around a dozen people gathered outside the Amazon offices on the , Burlington Road in south Dublin on one of the biggest shopping days for the company.

The campaign, led by Progressive International, aimed to highlight the “unsustainable environmental” practices and worker conditions within the global giant.

They called for Amazon workers to join the protest and for the company to take immediate climate action.

Activist and protester Dylan Murphy said he wanted to join in the call to ‘Make Amazon Pay’.

“It’s a global campaign that is happening across the world in 84 different countries. We are calling on Amazon to pay their workers, for the environment, and to pay their taxes essentially,” Mr Murphy told PA news agency.

“Black Friday is a holiday that Amazon invented to a certain degree. A big huge call to consumers, to make people spend more on their website. We are doing it on Black Friday as a counter-protest to the day itself and saying we don’t need to consume more, we need to take a more sustainable approach to things.

“The data centres Amazon has are said to take up about 4.4% of our electricity, so it’s a huge amount going into these facilities that only hire about up to 50 people.”