IF Myshall are to beat James Stephens on Sunday in Clane and take the Leinster intermediate club title it will be the attitude and the commitment of the players which will be responsible for the success. So says the manager, Brendan Hayden, who says he has learned so much since taking over at the start of the season. He has guided the club to their 23rd senior county title in succession but is reluctant to take any credit.

“They never take county finals for granted. The way they prepared for this one this year was an eye-opener for me,” remarked Hayden.

“I think about this a lot. People ask what is the secret? The secret is to go down to the field on a Tuesday, a Thursday and a Sunday morning and watch how these girls apply themselves.” 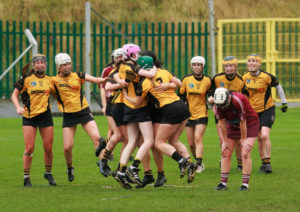 He indicated that the management team act as facilitators but that is all. The rest is down to the players.

“They want to represent themselves, their family and their club well. In the coaching sessions, they are pushing on the whole time. We set standards and we set challenges. The players try to meet them.”

Hayden doesn’t look for superlatives. All he wants is honesty and an attention to detail.

“Will you ever get perfection? Or what is perfection. If we win the Leinster final on Sunday what is perfection after that and after that. A friend of mine, Mick Kehoe once said, perfection sometimes gets in the way of good. You can pursue perfection all you like but given the time of year and the conditions we are playing in, a coach has to have empathy for the players.”

Against Naas and Na Fianna in previous rounds, these were games which could very well have gone away from them. Hayden since the players dug deep.

“Up in Na Fianna last week, there was a bitterly cold wind and some of the girls were actually white with the cold. Yet they stayed going. You can’t berate them too much if they miss a catch. You have to have empathy for them in that situation,” stressed the Myshall manager.

He says the experienced players set standards but the younger players  strive to match those standards.

“Every year there is new blood coming in there. There are a few new faces making their way on to the team this year. For them, it was their first county final (this year). Aine Nolan, Rhiannon Kenny, Caoimhe Jordan. They are all minors. There are five minors on the team.

To see how the older girls set the example. The way they are striking the ball, you would not want to get a belt of it. They are intense. They are quality strikers of the ball. It is full pelt in every drill and every game we play.”

To hear the full interview with the Myshall manager, tune in to the Across the Four Lakes Podcast.