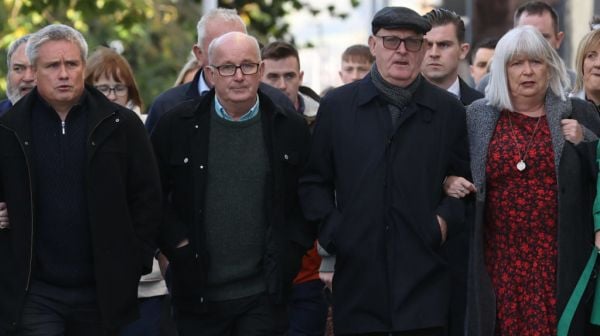 The family of Aidan McAnespie have described a day of mixed emotions after a former soldier was convicted of his killing more than 30 years ago.

David Holden was found guilty of the manslaughter of Mr McAnespie close to an army checkpoint in Co Tyrone in 1988.

Many members of his family and their supporters were at Belfast Crown Court on Friday morning as Mr Justice O’Hara delivered the verdict.

Outside court, Mr McAnespie’s brother Sean became emotional as he recalled family members who had not lived to hear the judgment.

“We waited 34 years, we never thought we would have got it,” he said.

“I’m thinking of my father and my mother that prayed and prayed for this day, and they’re not here to see it.

“As a family we’re very relieved and happy. We’ve such a big family, cousins, community and relations to help us through this, it took the whole lot to get us over the line.”

Brian Gormley, a cousin of Mr McAnespie, said this was why families fight for decades.

He described a day of mixed emotions, and referred to those who had not lived to see it, including both of Mr McAnespie’s parents, as well as his sister Eilish who initially led the campaign for justice.

“We’re thinking primarily of Aidan, of Eilish (his sister) who, for the first 20 years of the campaign led the charge – and probably at the cost of her own health – we think of Lizzie (his mother) and John (his father),” he said.

“Some people will wonder why do families persist for 34 years following cases this old.

“Well, it’s very clear. John, Aidan’s father, the day that the PPS announced that David Holden was going to be prosecuted, said the only demand he had is that he hears the truth, because as a family we did not believe the version of events that David Holden or the British government put out at the time of Aidan’s shooting.

“I think we have been corroborated in terms of Justice O’Hara’s ruling today.”

Mr Gormley also criticised a government Bill which would end historical prosecutions from the Troubles.

“The important thing to take out of today’s ruling is, yes, Aidan McAnespie was shot 34 years ago, the argument is always that the passage of time will make it almost impossible to get to the truth. This ruling today blows that out of the water,” he said.

“It is possible for other families, and we would encourage other families to not give up hope, there is always a chance of you getting justice.

“We feel some sense of closure in terms of what we have got out of the trial, other families are entitled to the same.”

Grainne Teggart of Amnesty International, who has been supporting the family, said the judgment “must sound the death knell” for the legacy Bill.

“We call on the UK Prime Minister Rishi Sunak to drop the Bill. It cannot be right that the UK government are deciding who gets justice for serious crimes such as manslaughter, murder and torture,” she said.

“This family here today after 34 long years have got justice. Other families are waiting for justice and we call on the British Prime Minister to drop the Troubles Bill. It is not too late to do the right thing.

“Every member of the community and every victim of the Troubles deserves justice.

“Today is about Aidan McAnespie, and it has been nearly 35 years for this family to get to that point, and they’re to be commended for the dignity with which they have fought their campaign.”