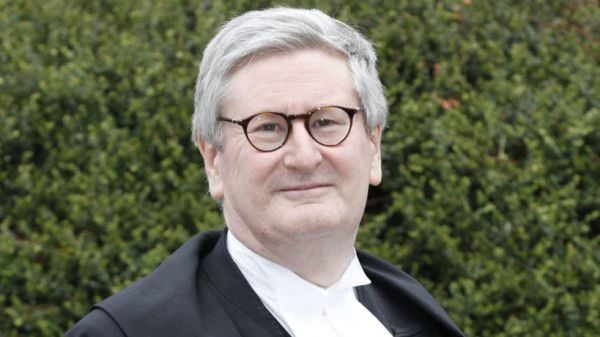 Rich and glowing tributes from leading figures in the Irish legal establishment were paid to senior Supreme Court judge Mr Justice John MacMenamin who is retiring after almost two decades on the bench.

The tributes were led by parties including the Chief Justice Mr Justice Donal O’Donnell, senior court officials, the chairs of the Law Society Maura Derivan and the Bar Council of Ireland Sara Phelan SC as well as the Attorney General Paul Gallagher SC, who said that he would be retiring from his role next month.

Mr Gallagher said that on behalf of the Government he was pleased to join in with the many tributes to his colleague and friend, before adding that this would be last time he would speak on the occasion of a senior judge’s retirement before he steps down as Attorney General in the coming weeks.

Mr Gallagher’s announcement before the large number of judges and senior lawyers gathered to acknowledged Mr Justice MacMenamin’s many achievements end recent speculation regarding his future in the role he took up for the second time following the formation of the current coalition government in 2020.

Mr Justice O’Donnell paid tribute to his colleague who he said that firstly as a barrister, and then as a judge had been heavily involved in a vast number of very important cases that had come before the courts over the last 50 years.

The judge had dealt with and had ruled on many difficult and complex cases in areas of law including, criminal law, commercial disputes, family and childcare actions, and constitutional law.

In particular dedication to cases involving highly vulnerable minors who had been let down by society was strongly praised.

Mr Justice MacMenamin, who is a keen historian, was also heralded as a strong believer that justice should be accessible to all persons, irrespective of their class and wealth.

Mr Justice MacMenamin, was one of the longest serving judges of the superior courts, steps down from his role after turning 70 years of age, which is the mandatory retirement age for judges.

The highly respected, hard-working, and popular judge qualified as a barrister in the 1970s and was appointed to the High Court in 2004 before being elevated to the Supreme Court in 2012.

He had previously served as Chairman of the Bar Council, the professional representative body of Barristers in Ireland. He had also been a leading light and promoter of human rights non-governmental organisation Free Legal Aid Centre (FLAC).

He had also openly supported Polish judges, on behalf of the Irish judiciary, during the 2015 Polish Constitutional Courts Crisis.

Reflecting on his career on the bench, which he described as “a vocation”, the judge said that he had the best job in world.

He wished his colleagues well, and thanked his family, friends and colleagued who packed the Supreme Court to mark the occasion of his retirement.