WINNING any match at any level in the provincial club championships whether it is football or hurling always brings with it a huge sense of satisfaction. The pressure of winning a county title is gone and progression in the opening rounds of the club championship can sometimes be treated as a bonus. Win a game or two then the mindset will change as the possibility of lifting a provincial title looms on the horizon.

This year, the semi-finals of both the senior hurling and football club championships were scheduled for Croke Park. That meant there was a massive drive in the clubs involved to be one of those four teams.

Maurice Aylward conceded it was on the minds of everyone in the club what was at stake when they lined up against Wexford champions, Ferns St Aidans, in the quarter-final at Netwatch Cullen Park.

“It was a very satisfying day. Surely was,” said Maurice Aylward.

“Going to Croke Park was one of the big incentives to win that game. It is a big day for the team and the club. A lot of lads wouldn’t have played in Croke Park. Some of the lads on the county team did play. It is a great day for the whole club and the parish as well.”

When the quarter-final was over, players, members of the management team and a huge crowd stood around the pitch talking for what seemed like hours.

“There was a lovely atmosphere. People were excited but in a lovely way,” acknowledged Aylward.

The Ballyhale man has never lost in Croke Park. He won two Leinster and two minor All-Ireland titles with Kilkenny, managed Ballyhale Shamrocks to an All-Ireland senior success and on the same night as Mount Leinster Rangers won their intermediate All-Ireland title in 2013, he was at the helm when Ballyragget won their junior crown.

“I have been reminding the players I don’t want to lose this one.”

Notwithstanding those great successes, he reflects on what has happened in St Mullins. Particularly, winning a county title.

“I enjoyed it immensely. It was my first year with the club. The way we started off at the beginning of the year, expectations were not quite as high. Seeing the way things went and the way things are gelling now, there is a sense of quiet satisfaction.

“Anytime you win in an atmosphere like that is good and with so many people on the pitch mingling around, chatting, smiling. To see the smile on people’s faces in the month of November is great.”

St Mullins could well be described as a vast rural parish. Players can live a distance apart but the hurling field in Bahana is the focal point for the population.

“They are a fine bunch of men. They are easy to get on with and there are nice people in the parish too,” says Aylward who draws parallels to his own native Ballyhale and his adopted club in 2022.

“They are the very same as the parish I came from. Ballyhale that is. Hurling is their number one. They don’t think of any other sport than hurling.”

But didn’t the club win back to back junior football county titles? They seem to love their football too?

“Ballyhale played a bit of football as well. I am not saying football is just a pastime for them. They were delighted to win a junior football championship this year but they love their hurling. It is the main sport. They are a closely knit parish. That is why they are so successful. There is a tremendous tradition in that parish. Like my own parish, the tradition goes back 30, 40, 60 years. There have always been good hurlers,” insisted Aylward.

The Kilkenny native needs no reminding of the task that awaits the men from the St Mullins parish. With a completely different group, Kilmacud Crokes are already in the football final.

“They are the biggest club in Ireland. They are flying at the football. They had a huge win over Portarlington and that will push on to the hurlers as well. Success breeds success. It creates an atmosphere in the club. The hurlers will be saying they have to beat St Mullins this week to imitate the footballers by getting to a Leinster final. That is one thing we will have to guard against.”

St Mullins go to Croke Park with a clean bill of health. Marty Kavanagh shipped a huge tackle in the quarter-final but still got up to knock over some crucial points. He was visibly shaken however.

“Marty got that heavy knock. He is 90% now but by Sunday, he will be 100%. When you go into Croke Park, you need men like him. You need leaders and he is one of them,” says Aylward. 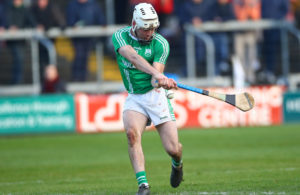 St. Mullins’ Martin Kavanagh should be fully fit for Sunday’s tie at Croke Park after shipping a heavy knock during their quarter-final win
Photo: ©INPHO/James Crombie

The final preparations will go ahead this week. It is not an All-Ireland Sunday so players might be tempted to travel in cars. The manager says it would be best if the players travelled as a unit. He wants them to absorb the atmosphere  together and treasure what they have achieved so far.

“I hope they are going to get a bus. Travelling in cars nowadays, you wouldn’t know where you get parking and that sort of thing. The bus bonds players. I think the club championship is great for a club as well. It passes the winter. That is what happens when you get a run. You don’t even notice the winter passing.”

The game is part of a double header at Croke Park with Carlow senior hurling manager Tom Mullally, along with Mount Leinster Rangers man Christy Kealy, leading Naas in the opening game against Ballyhale Shamrocks.