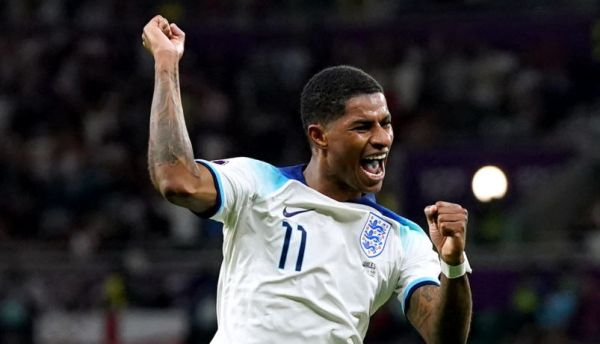 Welsh hopes of progressing were hanging by a thread heading into a Group B finale in which Gareth Southgate’s men only needed to avoid a four-goal loss to progress to the last 16.

The 104th meeting of the old foes was the first to be played at a World Cup and England comprehensively won Tuesday’s clash 3-0 in the desert as Phil Foden scored either side of Rashford’s fine goals.

The #ThreeLions progress to the last-16 stage of the @FIFAWorldCup as Group B winners. pic.twitter.com/Tvx5RNVTJP

The reward is a last-16 meeting with Senegal on Sunday, by which point Robert Page’s side will have long since left Qatar after their first appearance on the world stage in 64 years ended in frustration.

Wales’ draw with the United States and heart-breaking late loss to Iran meant they faced an uphill battle against their neighbours, who controlled a lifeless first half without creating too many clear-cut chances.

Chesney Hawkes’ surprising half-time appearance was the most entertaining moment of the evening until the 50th minute, when Rashford stepped up to score a stupendous free-kick.

But it was not to be his one and only goal in Al Rayyan.

The 25-year-old, making his first England start since June 2021, left to a standing ovation when he was substituted late on.

There was a great atmosphere ahead of kick-off at Ahmad Bin Ali Stadium, where rousing renditions of the national anthems were followed by both teams taking the knee before kick-off.

England were quickest out of the blocks and would have gone ahead inside 10 minutes had it not been for Ward’s quick thinking.

Kane’s smart, defence-splitting ball put Rashford through, only for the goalkeeper – in for suspended Wayne Hennessey – to smother the attempt having dashed off his line.

Foden drove wide and Rashford saw a fizzing drive headed away by Neco Williams as England toiled in their attempts to prise open a tight Welsh defence.

Nevertheless, English supporters confidently chanted “you’re going home in the morning” before a break in play as Williams was left with a suspected concussion.

The delay in taking the full-back off after blocking Rashford’s shot is sure to be scrutinised in the coming days.

Connor Roberts came into a defence that was nearly undone by a superb free-flowing move soon after, only for Foden to lash off target at the end of it.

Joe Allen blazed well off target too as Wales had their first attempt deep in stoppage time.

The half-time performance of popstar Hawkes was as surprising as the news that Brennan Johnson was replacing Wales captain Gareth Bale at the break.

But Page and Wales quickly saw hopes of a first win against England since 1984 extinguished.

Joe Rodon was adjudged to have fouled Foden and Rashford took the resulting free-kick from 24 yards, unleashing a sensational effort that beat Ward and found the back of the net in the 50th minute.

Rashford pressed Ben Davies on the right flank and the ball ricocheted forward to Kane, who sent a low driven cross to the far post where Foden coolly passed home.

Wales attempted to reduce the deficit. Jordan Pickford was panicked by a curling Daniel James effort and produced a fine reaction save to prevent Harry Maguire deflecting a Kieffer Moore shot home.

Southgate rung the changes with the game seemingly over, allowing Kane to get a breather, Kyle Walker to come off after his first start since October and Kalvin Phillips to get some minutes under his belt.

Wales defender Davies limped off and Aaron Ramsey joined James on a booking after a poor challenge on Jordan Henderson as the match looked set to peter out.

Rashford had other ideas.

The forward ran behind, showing good footwork and composure before sending a fierce strike through Ward’s legs for England’s 100th goal at World Cup finals tournaments.

The Wales goalkeeper soon denied the 25-year-old his hat-trick, before thwarting Jude Bellingham and watching Foden hook the rebound wide under pressure.

Allen became the next Welsh player to limp off and “that’s why you’re going home” greeted a wayward Moore shot.