EMMET  Mullins admits it is “exciting” to be taking Randox Grand National winner Noble Yeats back to the scene of his famous victory this Saturday, but warns his stable star will have to pass his “hardest test” if he is to land the Boylesports Many Clouds Chase at Aintree. 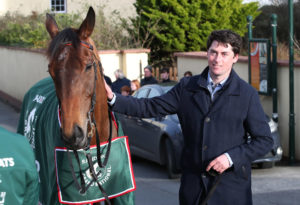 The gelded son of Yeats provided Mullins with the biggest success of his training career back in April when defying his 50-1 price tag to give amateur jockey Sam Waley-Cohen a fairytale send-off on his last ever ride.

Noble Yeats has had mixed fortunes in his two starts since that red letter day on Merseyside almost eight months ago, pulling up in a Grade Three contest at Auteuil before bouncing back to winning ways with victory in a Listed contest at Wexford last time out.

And while Mullins is looking forward to returning to Liverpool, he acknowledges that the seven year old will need to step forward again if he is to plunder a first ever Grade Two victory in the 3m 1f race.

He said: “It is exciting coming back to Aintree on Saturday and hopefully he will show the same love for Merseyside once again, just as he did back in April.

“The win in the Grand National has still not sunk in to be honest and I think it will probably take a bit longer for it to really hit me properly and dawn on me how big an achievement it was.

“It is not until a few plans go awry that you really appreciate the ones that have gone through. I know how fortunate we are to have won the race.”

With his eyes now firmly fixed on this Saturday, Mullins admits his Grand National winner will have to be at his best if he is to win over Aintree’s regular fences.

He added: “The Many Clouds Chase is a very solid race and it looks very competitive. It certainly isn’t a one horse race and it is great to be part of it.

“He has won his Listed race at Wexford and he is now taking another step up the ladder into a Grade Two. He appears to have taken his last race well and hopefully he can take another step forward.

“In the Grand National we were fortunate that we had a sound jumper along with a nice handicap mark of 147. This will definitely be his hardest test in an open class race.”

Reflecting on his latest display Mullins was pleased to see Noble Yeats put in a solid round of jumping under his new regular rider Sean Bowen and demonstrate that a line could be put through his below par effort in France.

He added: “We had all the plans in the world going to France but then we came back with nothing. The horse was none the worse for his trip to France and James (Reveley, jockey) sensibly looked after the horse and that showed back in Ireland when he won two weeks later at Wexford.

“It was a brilliant round of jumping he put in under Sean at Wexford. They got into a great rhythm and hopefully they can do something similar again this weekend.

“He is a funny enough old character and I’m sure Sean would have been delighted to have had the chance to sit on him and learn a bit more about him. Now Sean has that ride under his belt on him he will be more the wiser for this weekend.”

Noble Yeats is as short 12-1 to defend his Randox Grand National title and a general 50-1 chance for the Boodles Cheltenham Gold Cup at The Cheltenham Festival in March.

However, he believes this weekend’s assignment will potentially dictate his path for the remainder of the season and he added: “We didn’t really plan this race as he ran quickly back after his trip to France at Wexford, but it fits well in the calendar.

“He is on a tricky rating (160) and this will tell us a lot more about where we go in the future. We have no major plans at the moment and will take things one race at a time.”