A band new affordable syndicate aimed at the ordinary racing fan and the purchase of a horse for American owners specifically aimed at the 2023 Aintree Grand National. These are just two new ventures which John Shark Hanlon has been involved in recently.

The horse trainer lives on the border of Carlow and Kilkenny near the Royal Oak. He made history when he brought Hewick to the United States in October and came away with the American Grand National. Following on his successes, he is now building on his name and reaching out to the ordinary racing follower with an affordable proposition.

Hanlon has brought two horses, Pahlavi and Fast Medicine which are graded at 78 and 84 respectively. For no hidden extras, the cost of ownership is €1,000 for the year and this covers an equal share of each horse per member for the full year, all training fees, colours vets fees and entry to races. According to details for the proposed syndicate, there is a limited number of shares in the proposed new club which is done on a first come first served basis.

“A lot of people are after phoning me requesting presents for Christmas for their parents and such,” said Hanlon

“They are two high-class horses. It is a great way to get into horses and have a bit of fun. Maybe one could turn out to be a championship horse and we could end up somewhere with him,” speculated the trainer.

In an entirely different venture, fresh from his historic win in the American Grand National with Hewick, John Shark Hanlon, is targeting the Aintree Grand National with Cape Gentleman.  He has bought the horse for American connections whose great grandfather, American businessman and owner/breeder Stephen Sanford, won the race with Sergeant Murphy back in 1923.

Hanlon didn’t have far to travel to buy the horse as he procured Cape Gentleman from Emmet Mullins who only lives about three miles away at the other side of the Carlow Kilkenny road beside his uncle, Willie Mullins.

“I bought him for an American owner to go for the Grand National. That is the plan. He is a man whose great-grandfather won the Grand National in 1923. He just wanted to have a runner in it. If he wins, he wins. If he gets beaten, he doesn’t mind. They have 50 seats taken in the box in Liverpool that day. They wanted a runner. He was the only horse that I could find around that suited,” explained Hanlon. 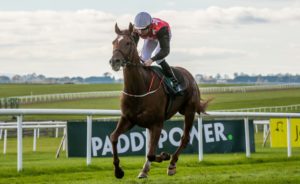 Cape Gentleman on the way to winning The Paddy Power Irish Cesarewitch in 2020, now in Shark Hanlon’s yard, he will be aimed at next year’s Aintree Grand National
Photo: ©INPHO/Morgan Treacy

There are nothing sure in racing and for the moment the trainer doesn’t have a road to Aintree planned out. He did say it was important to have a have the horse in the yard at this time of year before he goes into action later in the season.

“He is a 150-rated horse who is going to go for the English National. I only got him during the week. He is a high-class horse. He will run over Christmas somewhere, but he is one I have bought for American owners, whose great-grandfather won the National in 1923.

“They want to have a runner in it next year because it is 100 years down the road.”