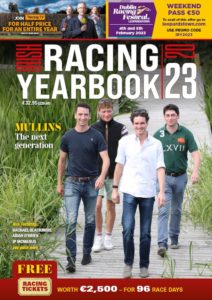 Fourteen years ago, I was asked by then Irish Racing Yearbook editor, Mark Costello to have a chat with the three teenage Mullins first cousins that were making a big impact.

Patrick, son of Willie, was 18 at the time, turning 19 in December and he had won the first of what currently stands at 14 champion amateur jockey titles the previous season, a campaign that included the Cheltenham/Punchestown Champion Bumper double on Cousin Vinny.

Emmet, whose dad is George, had just turned pro, after winning the Goffs Land Rover Bumper.

And Danny, from the Tony gene pool, was a 16-year-old just out of the pony-racing circuit, who had ridden 18 winners in four months, including a treble during the Galway Festival. Even then, he had the reputation as the joker in the pack.

“I’m the quiet one,” he half-heartedly protested. “I’d say Emmet is the one to keep an eye on.”

Wrong and right at the same time.

Much has happened in the intervening period. They are grown men of course – most of the time – and achieved so much in their lives and professions. Even in the context of all that, it is remarkable how spectacular the past year has been for the trio.

Danny bagged four Grade 1s, landing the King George VI Chase on Tornado Flyer and then making it two in a row in the Stayers’ Hurdle on Flooring Porter at Cheltenham, earning widespread praise for his horsemanship in the process.

Emmet, who had secured a Cheltenham Festival winner as a pilot before packing it in and turning heads as a trainer with his successful international forays, trumped all that by saddling the winner of the Grand National, Noble Yeats.

So I thought it might be fun to sit the three of them around the table and like the makers of the comedy Hot Shots!, go with Part Deux.

David, son of Tom, was only 12 in 2008, dreaming of playing hurling for Kilkenny or maybe showjumping in an Aga Khan but not winning a Grand National. He wound up doing just that only eight years later and then four years after that, gave it up. He is now, among other things, building a trading operation.

Danny suggests adding David to the mix, because three opinionated Mullinses might not be enough. So we rendezvous at The Lord Bagenal in Leighlinbridge.

Irish Racing Yearbook 2023 is the definitive, established and revered annual chronicle of racing on these shores, covering the entire spectrum of the racing and thoroughbred industry in the form of interviews, profiles, analysis and more.

A collaboration of the best writers and photographers with the leading protagonists in all spheres from breeding to sales, from point-to-point to the racecourse, it has been a favourite stocking filler at Christmas for many years.

The cover story is an engaging, entertaining, opinionated and enlightening interview by editor, Daragh Ó Conchúir with the four Mullins first cousins, Danny, David, Emmet and Patrick, 14 years after he had spoken to Danny, Emmet and Patrick for Irish Racing Yearbook 2009.

Others featured include owner-breeders Moyglare Stud, the Aga Khan operation and Kirsten Rausing, as well as stallion men Ronnie O’Neill and Paul Cashman of Whytemount and Rathbarry Studs. Indeed a comprehensive thoroughbred breeding section extends to the digital publication, G1.

Apart from the editorial calibre and visual feast, the Irish Racing Yearbook is coveted by regular racing fans for the GO RACING vouchers kindly provided in conjunction with the racecourses of Ireland, offering free admission to 96 specific meetings throughout the year, at a total value of €2500. That constitutes just over than 75 times the price of purchase – more for those that capitalised on the significant pre-publication discounts.

“I had been thinking about this race for the last 12 months, and I just knew that I wanted to ride the race differently, ride him to his strengths, and if that got me beaten, then so be it” – Rachael Blackmore

“I don’t want to be somebody who withers away. I want to live every day like it’s my last and someday I’ll be right” – JP McManus

“Everybody has to do what they have to do to get people into racing, particularly young people” – Aidan O’Brien