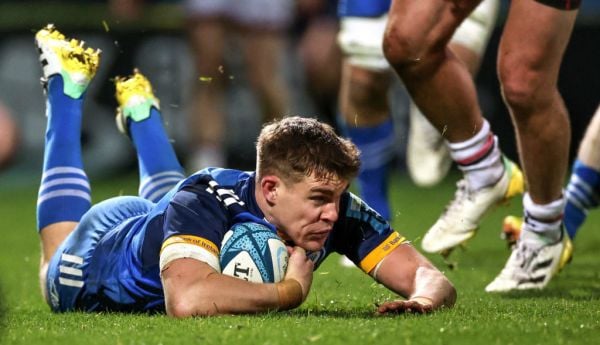 Leo Cullen’s men trailed by 19 points at one stage, with tries from Rob Herring, Kieran Treadwell and Ethan McIlroy punishing Healy’s head-on-head tackle on Tom Stewart in the 20th minute.

However, with Ronan Kelleher reducing the deficit to 22-10 by half-time, the BKT United Rugby Championship leaders somehow cruised to their ninth straight victory thanks to scores from Ringrose (two), Andrew Porter and James Lowe.

It was a huge missed opportunity for the Ulstermen, who had tasted victory here last year. They lost both James Hume and Nick Timoney to the sin bin, but gained a late bonus point through replacement Sam Carter.

Knock-ons from Jamison Gibson-Park and Billy Burns summed up a stop-start opening quarter, yet the loss of Healy was immediately exploited by the visitors.

Stewart’s replacement Herring scored from a lineout drive in the left corner, Cooney nailing the difficult conversion for a 10-3 lead.

After Burns drew a high tackle from Byrne, McCloskey and Moore were stopped short before powerful lock Treadwell widened the margin to 14 points.

Leinster were stung further when Stewart Moore used turnover ball to race clear up the right and release McIlroy to canter to the posts.

Hooker Kelleher piled over from a late maul, with Byrne converting from out wide, and Leinster’s international-laden bench brought plenty of impact.

Ringrose nimbly spun away from Hume for a slick 58th-minute try, converted by Byrne. It was a double blow for Ulster, with Hume sin-binned for head contact.

Increasing his influence, Ringrose soon stepped inside two defenders to move his side ahead at 24-22. Timoney saw yellow for collapsing a maul beforehand.

With more gaps opening up, the influential Porter plunged over from a ruck.

Byrne then scooped a long pass out for Lowe to strike in the 75th minute before Carter made sure Ulster took something home.