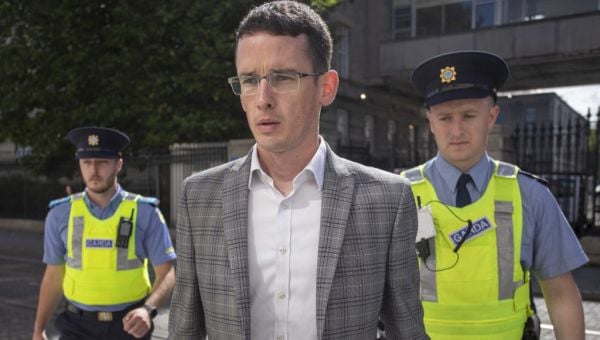 Jailed teacher Enoch Burke wants his defamation claim over a newspaper article published about him last October determined as soon as possible, the High Court heard on Monday.

Mr Burke, who has been incarcerated in Mountjoy Prison since September over his failure to obey a court order to stay away and not attempt to teach at the school at which he works.

Mr Burke, who was suspended in August from his position at Wilson’s Hospital School in Co Westmeath, claims he has been the subject of internal disciplinary and High Court proceedings due to his objection to transgenderism.

He claims an article published in the Sunday Independent in October regarding his alleged conduct in Mountjoy Prison contained untrue and defamatory statements.

Arising out of the article, Mr Burke sought an order under section 33 of the 2009 Defamation Act seeking to have the article removed and that it not be republished.

However, that application was adjourned after Mediahuis Ireland Ltd, which publishes The Sunday Independent and The Irish Independent, agreed on a without prejudice basis to remove the article from its website after it received Mr Burke’s complaint.

The paper also gave an undertaking before the High Court that it would not put the article back on its website without giving Mr Burke 72-hours prior notice.

The defamation case, in which he has sued parties, including Mediahuis Ireland, returned before Ms Justice Eileen Roberts at the High Court on Monday.

Mr Burke said that while he was no longer proceeding with his application for a Section 33 order, he does want the full hearing of his defamation action to go ahead as soon as possible.

He said his statement of claim and other documentation he requires to advance his defamation claim will be lodged with the court very shortly.

Once it is formally lodged he said the defendant has eight weeks to lodge their defence to his claim.

Representing himself and speaking via a video link from Mountjoy Prison Mr Burke said he was concerned that the defamation action not be left to “drag on”, claiming it could prejudice his ongoing proceedings against his employer.

He asked, given his particular circumstances, that the judge help ensure that the eight-week timetable for the filing of a defence is adhered to by the defendant.

He said he was concerned by the story, which he said was “made up”, and had been widely circulated and read, and was damaging to his professional reputation as a teacher.

He also expressed his concern that he had heard nothing back from the defendant, which, he said, had promised an investigation into the article.

In reply, Lewis Mooney Bl, for Mediahuis, said his client has abided by the undertaking previously given to the court in relation to the article.

Counsel said it was not on notice of Mr Burke’s application regarding the pleadings in the defamation action.

Ms Justice Roberts noted Mr Burke’s application. The judge said that if no defence was lodged within eight weeks then he was perfectly entitled to bring a motion seeking judgement in default of a defence.

The judge said she was prepared to consider granting Mr Burke a priority hearing if he had to bring such a motion. However, the judge expressed a hope that the defence would be lodged within the eight-week time period allowed under the rules.

The matter was adjourned.

Mr Burke’s appeal against injunctions which resulted in contempt of court proceedings and his eventual incarceration for failing to abide by an order obtained by Wilson’s Hospital School is due to be heard in February.

The full hearing of the action brought against him by the school remains pending before the High Court.