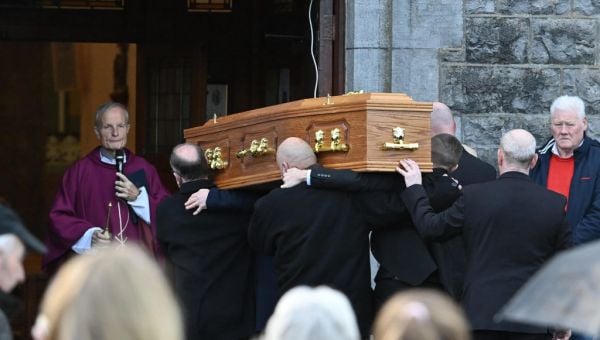 Funerals have taken place for two men killed in Co Monaghan as gardaí continue to investigate whether one was involved in the other’s death.

Detectives launched a murder investigation after the body of Christopher Mooney, 60, was found in his home in Broomfield, near Castleblayney, on Thursday morning last week.

They are investigating whether his death is linked to man killed in a fatal road collision that took place on the N53 a few miles from Mr Mooney’s home that same morning.

Kieran Hamill, 37, from Crossmaglen, across the border in Co Armagh, died after being struck by a car as he crossed the Ballynacarry Bridge on foot.

Gardaí are investigating whether Mr Hamill, a father of two, was involved in the death of Mr Mooney and was knocked down as he fled the scene.

Mourners gathered at St Patrick’s Church at Broomfield, on the outskirts of Castleblayney, for a requiem mass for Mr Mooney.

The funeral for Mr Hamill took place at St Patrick’s Church in Crossmaglen.

Presiding at the service for Mr Mooney, priest Fr Michael Daly said the community was in a state of “shock and sadness” at the “untimely and tragic death”.

“Today as a parish community and beyond we are numbed, we are shocked, we are saddened – and above all the family of Christopher – by the untimely and tragic death of Christopher,” he said.

During the funeral for Mr Mooney, Fr Daly also said a prayer for Mr Hamill and his family.

He added: “And we think of all families who are suffering from trauma or loss of any kind.”

Gardaí continue to appeal for anyone with information to come forward.