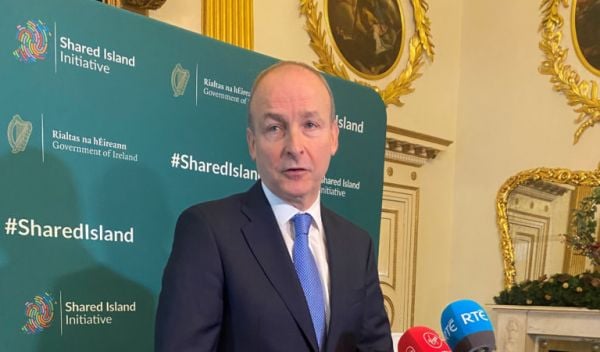 Taoiseach Micheál Martin said he is “not surprised” twice as many people from Northern Ireland would vote to remain in the UK rather than for Irish unity.

Mr Martin said there is a long way to go to achieve unity, after the new survey also showed that there is a majority of more than four to one in favour of a united Ireland in the Republic.

He said he is “more concerned” about the substance of learning to share the island with different communities, rather than poll findings themselves.

Speaking at the second Shared Island forum in Dublin Castle, Mr Martin stated that while opinion polls are important research, they will “never unite Ireland”.

#SharedIsland was established to unlock the potential of the Good Friday Agreement.

Today, I am delighted to announce a further €50m investment. Funding to deepen collaboration on climate action, culture, enterprise, education and tourism.https://t.co/XPd8LGIyz0 pic.twitter.com/KPXgwgkdE9

Mr Martin said: “To me, since the day we signed the Good Friday Agreement, it’s been a journey of trying to build reconciliation, mutual understanding, and we have a long way to go.

“In some respects I’m not surprised by the opinion poll findings in themselves. What I’m more concerned about is the substance of really learning to share this island together.

“The entire debate around the border poll or the outcome of (the Northern Ireland) election around that, I think that’s more about tactics and the campaign that certain parties have sort of grabbed it and said, ‘we must have this within five years or else’.

“It’s good campaign and it’s got a certain level, but it doesn’t change a whole lot. In my view, I’m much more focused on what I would judge to be the substance of the issues facing us.

“We’ve a lot to do now and those polls show that. There’s a lot of issues there that people are concerned about and worried about, be it health services, be it  peace, be it disruption, and so on like that.

“That’s not just politics, I think it’s also economy. I see a lot of progress, and I think a lot of people in the North and the Republic want to see things working, want to see their politicians get on with the institutions that have already been created by the Good Friday Agreement.”

The Irish Times opinion poll also found that half of all those who responded in Northern Ireland said they would vote against unity, including 21 per cent from a Catholic background.

The poll also revealed that people in the Republic are not willing to make concession to unionists in a united Ireland, with half saying that any changes to the National anthem and flag would put them off voting in favour of unity.

However, Mr Martin said that flags and emblems are not the substance of the debate.

“We’ve got to be careful about opinion polls at a particular point in time. A lot of work has to go into all sorts of scenarios that people come to change opinions. It’s not going to happen in terms of opinion polls,” he added.

“We saw how symbols some time back in the north erupted – it shouldn’t be about flags and emblems, it has to about the substance of the relationship and the quality of life and how do we improve quality of life.”

Mr Martin also rejected the establishment of a Citizens’ Assembly on Irish unity, saying that the Shared Island programme is “the way forward”.

“It’s very substantive. It’s very strong. It’s deals with a whole range of different communities that the model of a Citizens Assembly could never ever achieve.”

He made the comments after he announced a €50 million for a range of Shared Island partnership programmes.

Among the programmes to be funded include biodiversity, tourism initiatives and further funding to the North-South Research Programme.

In his address, Mr Martin said that Brexit continues to strain political and community interactions in Northern Ireland and “hinder” North-South and Ireland-UK relationships.

“While there has been hugely important progress – the immense potential of the Good Friday Agreement to bring people on this island together has not yet been delivered.”