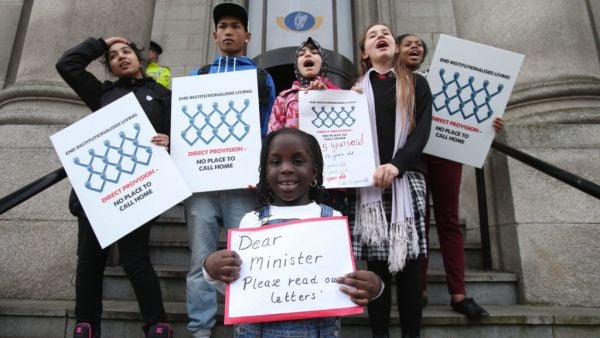 The government has been criticised for failing to phase out the Direct Provision system, with concerns raised about the knock-on effect that it has had on children.

The system of accommodation centres for asylum seekers run by for-profit companies was set up as an emergency measure over 20 years ago.

It has been heavily criticised by organisations including Amnesty International, and successive governments have faced calls to dismantle the system.

In February 2021, Minister for Children and Integration Roderic O’Gorman published a white paper on phasing out Direct Provision centres in favour of an international protection system by 2024.

It would allow asylum seekers to live in and be part of communities.

A conference is to be held on Wednesday to examine how the white paper plan can be renewed for the current context, where Ireland’s severe housing shortage has been squeezed further amid Russia’s invasion of Ukraine and a surge in asylum-seeker applications.

Some 72,000 Ukrainian refugees are expected to have arrived in Ireland by the end of the year, while the number of asylum seekers has more than doubled compared to last year.

It comes after a report from a banking lobby group indicated that between 2011 and 2022, Ireland’s population grew by over half a million people while housing output increased by just 130,000 units.

Ahead of the conference on Direct Provision to be held on Wednesday, Children’s Rights Alliance chief executive Tanya Ward said that conditions had become worse for children since the White Paper was published.

The group has reiterated calls for a child benefit-like payment to be provided for minors living in Direct Provision.

“The conditions for some of the children, young people and their families living in Direct Provision are deeply concerning to the Alliance and our members – a lack of own-door accommodation for families; cramped, shared living and sleeping spaces; children and young people being upended and moved; limited access to cooking facilities or nutritious meals,” Ms Ward said.

“While there is an undeniable and unprecedented pressure on accommodation across the country, the lack of progress on other key commitments to children in the Government White Paper has exacerbated issues for children and young people.

“Unless the Government invests significantly in developing accommodation options, the Direct Provision system will go into full free fall.

“New targets can be met. The initiatives named in the White Paper can be implemented.

“We need some fresh thinking to get the promises in the White Paper over the line.

“Children in Direct Provision were forgotten about in Budget 2023.

“They are at higher risk of living in consistent poverty and are also facing into a bleak winter with the current cost-of-living crisis.

“The immediate relief of the cost-of-living measures in Budget 2023 is not a feeling shared among these families. These families do not qualify for the Qualified Child Increase (a payment for children whose parents are in receipt of social welfare).

“For years, we have advocated for a child benefit-like payment for children living in Direct Provision that would help support families, particularly given current financial pressures.”

Dr Catherine Day, who led the working group upon which the government’s white paper was based, is also due to speak at the conference on Wednesday, along with Mr O’Gorman.