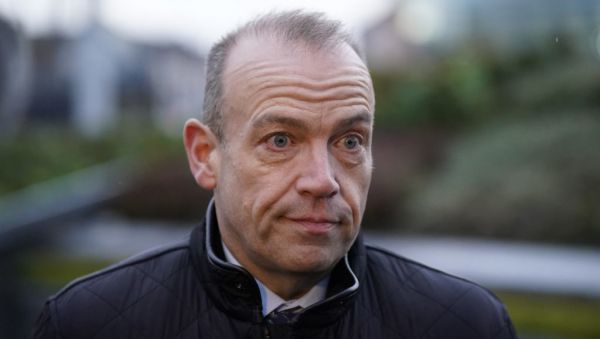 Chris Heaton-Harris has said he will make a statement on when MLAs’ pay will be cut “very, very soon” and said that he believes a deal can be done on the protocol by January.

He made the comments as Minister for Foreign Affairs Simon Coveney suggested the cut would take effect in January.

The Northern Ireland Secretary has said he will reduce Assembly members’ pay by 27.5 per cent so that it “reflects the work they are currently carrying out”.

It comes as the latest attempt to restore the powersharing institutions at Stormont failed.

When asked about when MLA pay would be cut, Mr Heaton-Harris told reporters in Northern Ireland: “I’ll be saying something about that very, very soon, but I’ve only just gotten the powers to do it.”

The legislation to give him the powers to cut MLA pay received Royal Assent on Tuesday night.

When asked whether cutting pay was an empty threat to encourage Stormont to be restored, Mr Heaton-Harris said he’ll “follow through”.

Speaking on Tuesday after meeting with Mr Heaton-Harris, Ireland’s foreign affairs minister Simon Coveney suggested that the pay cut was “likely” and that it would take effect in January.

“I think he’s likely to do that and I can understand why.

“At a time when budgets are tight in Northern Ireland in terms of public services and so on, I can understand why – if MLAs are not doing what they want to be doing, which is to be to be working in a fully functioning Assembly and an Executive – if they’re not doing that then I think it’s difficult for him to justify not cutting pay.

“But look, I hope that that the decision around that, which won’t take effect until January, will be very short lived because you know, we have to find a way to get devolved institutions back up and running again, which of course, will make decisions around salary a non-issue.

Mr Heaton-Harris said he was optimistic that the Assembly and Executive could be restored by January, suggesting that it could be done through an EU-UK deal on the protocol.

He said: “I will always be a glass half-full man, and yeah I think we can do it.

“The most important thing to help get the Assembly back and the Executive up and running is to get a working deal on the protocol and that work is ongoing and I really do believe that can be done.”

Negotiations between the UK government and the EU to resolve differences over the protocol are continuing.