SCOUT Frame, SETU Carlow’s American basketball star, has been named as the MissQuote.ie Division 1 player of the month runner up for November, the second month in a row that she has finished second behind former Carlow player Alyssa Marie Velles, who now plays for Portlaoise.

The award rounds off a good week for the American, who is from Kansas and a graduate from Northwestern Oklahoma State. On Monday, she set a college record of 53 points as the SETU College varsity squad beat SETU Waterford by 86-65. The varsity squad will be next in action in January against UCC but Frame and the National League side will play their final league game before Christmas when they travel to Limerick to play Limerick Sport Huskies on Saturday at 5pm. 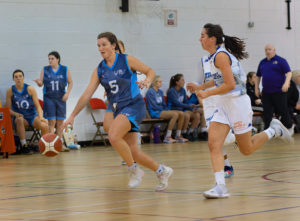 Scout Frame is settling very well into life on the court in Carlow
Photo: michaelorourkephotography.ie