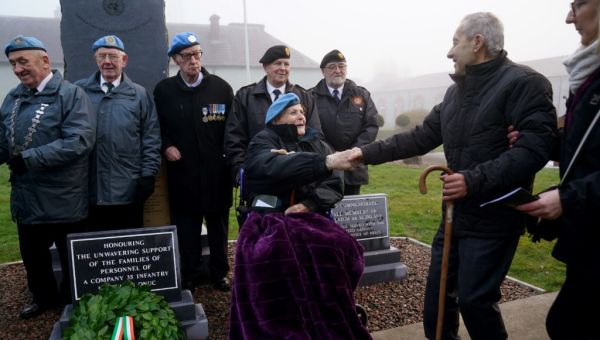 A permanent monument has been unveiled at an Athlone barracks dedicated to the families of the Jadotville soldiers.

Irish soldiers from the ‘A’ Company of the 35th Infantry Battalion were on a peacekeeping mission manning a UN post in the town of Jadotville in the Congo in September 1961.

On September 9th, a large force of Katangese Gendarmerie surrounded the 158 men, and four days later they came under attack.

They endured almost continuous attack until September 17th, when they were taken into captivity.

Charlie Cooley, who was a member of the A company, attended the ceremony at Custume Barracks on Friday with his brother and former Defence Forces member, Paul Cooley.

He still remembers the stress of that time when his brother had been captured.

“I was only 10, and I remember my mother sitting in front of the fire every night crying and praying.

“At that time, there were no phones, we didn’t know what was happening because there was no communication. The only phone in the town was in the centre of the town in a phone box.

“We just heard that Charlie was captured and that was it, we were just waiting for news to come through. We didn’t even know about the siege, what had happened or why.

“And then one night in October, I was going to the shop, I know it was dark, I was going up the road, and I heard a sort of a click clop of boots coming towards me.

“The next thing I ran into my brother who was after being released and sent home and got home and he was in Edwardstown, and we didn’t even know he had been released.”

Asked if his brother enjoyed the ceremony, Paul said he was glad he came up to see the men with whom he had served in the Congo.

Minister for Defence Simon Coveney attended the ceremony on Frirday and said the aftermath of what became known as the Siege of Jadotville had a lasting effect on the soldiers and their families.

“The monument will stand here in Custume Barracks as a perpetual acknowledgement and recognition of the roles of the families, including all of you who have gathered here today,” Mr Coveney said.

The surviving members of A Company, the members who had died, and all their family members were remembered during the ceremony.

The monument bears the inscription: “Honouring the unwavering support of the families of personnel of A Company 35 Infantry Battalion ONUC.”

It was commissioned on the recommendation of an independent review group established to examine the events at Jadotville in 1961, in recognition of the role of parents, wives and families during the Battle of Jadotville and the soldiers’ time in captivity.