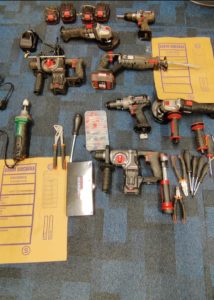 STOLEN property, such as power tools, are often being sold on the Done Deal website and at car boot sales, according to garda superintendent Aidan Brennan. Supt Brennan warned people to walk away if a deal looked too good to be true.

“I’d say to anyone: buy from a reliable source. You can be prosecuted for handling stolen property. If you buy it from the boot of a car and the price is too good to be true, you are leaving yourself open to criminal prosecution.”

Supt Brennan said: “These thefts would stop if the market stopped buying them.”

Chair of the Carlow Joint Policing Committee (JPC) Michael Doran had enquired about marking tools that could help return stolen items to their owners. Crime prevention officer Sgt Peter McConnon said Property Marking Ireland was launched at the National Ploughing Championships, which had the support of the Department of Justice. The company makes a mark or marks with a specially-designed machine.

“It gives communities the opportunity to mark their property with an Eircode or other marking,” the sergeant explained.

Sgt McConnon said that some local authorities had begun to buy machines for local communities. The cost of the machine is around €5,000. “It’s a tried and tested way of preventing the theft of property and getting it back to its owners,” he said.

It was suggested that Property Marking Ireland should be invited to the JPC to make a presentation on the initiative.

Sgt McConnon added that the gardaí had also launched a new app that allowed members of the public to index and record their personal property.