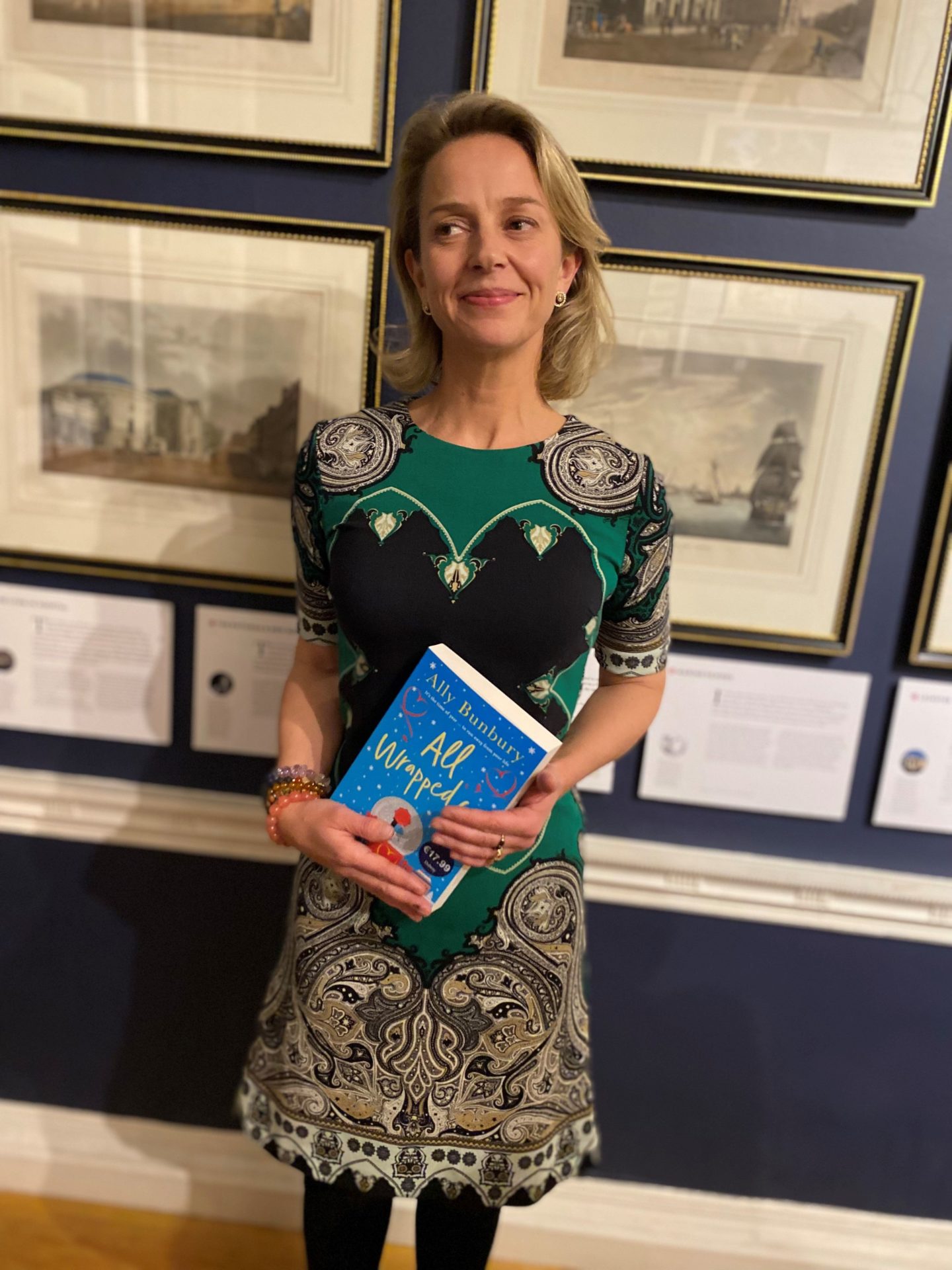 Author Ally Bunbury at the launch of her book, All Wrapped Up

LOVE is all around us in Ally Bunbury’s new book and it’s never, ever too late to fall in love, especially at Christmas, when there’s holly, mistletoe and hormones at play.

In the depths of Covid social restrictions, when everyone in Ireland rediscovered the joy and beauty of the great outdoors while also being riddled with anxiety about catching the virus, author Ally Bunbury was holed up at home writing her latest book.

While the sun beamed down over the summer months and people connected with one another despite the two-metre distance rule, Ally was listening to Mariah Carey’s festive hit ***All I want for Christmas*** while staring at a miniature Christmas tree on her desk for inspiration. She wanted to immerse herself in festive feels, where pine needles and smoky wood fires filled the air; where fairy lights glistened and mulled wine warmed the flesh. The formula must have worked, because Ally has just published her latest novel ***All wrapped up*** to much acclaim.

“The world was quite bleak and anxious about Covid when I was writing this, so I wanted to write something that would make people feel good. Christmas is a time of warmth and happiness and I wanted the book to feel jolly,” explained Ally.

***All wrapped up*** was launched by former newsreader and newly-crowned icon Anne Doyle at the Little Museum of Dublin on St Stephen’s Green, Dublin.

She invited Anne to launch the book after her husband, writer and historian Turtle Bunbury, featured Anne in his podcast ***Vanishing Ireland***.

Ally, who used to work in London and New York in public relations, worked her magic in media circles and was interviewed by the likes of Martin King on ***The Six O’Clock Show*** and Pat Kenny on his Newstalk show.

“Pat Kenny knew the book and knew the characters. He loves old houses and loved the main character Lady Serena, so it was really lovely being interviewed by him,” smiled Ally.

The book is set in Lady Serena’s crumbling old pile of Knockboden on the Carlow/Wicklow border. She’s a hardy old bird who chain-smokes and likes a good breakfast gin to start the day. She’s in dire need of help, though, in decluttering the house and bringing it back to life after years of neglect, so she places an ad in a magazine, looking for someone. Cue the entrance of the young, beautiful but heartbroken Holly O’Leary, who escapes a failed relationship in London and decamps to Knockboden to help Lady Serena.

While Holly endeavors to help the lady of the manor, Serena’s son Tyrone enters the scene, fresh from New York, dusting himself down after a second divorce. Holly begins to despair of ever whipping the old house into shape and bringing in some money, when a TV production company gets in contact to say that they want to use the house as the location for their new reality-TV show based around two people who fall in love, but who are not allowed to touch each other until after they get married. The wedding will be held at Christmas, so Holly, Serena and their team of festive helpers have a strict deadline to meet to get the house functioning again.

“Holly takes a cold, dark house and brings it back to life. There hadn’t been a Christmas tree in Knockboden House in 20 years, but she manages it. She shows what can be done with a lick of paint, new cushions and a few rugs. The house is transformed through pure hard work,” said Ally.

Ally was clearly inspired not only by Mariah Carey’s Christmas hit but also by her own life in Rathvilly. She and Turtle live on the Lisnavagh estate, a stone’s throw from the mansion house where Turtle grew up as the son of Lord and Lady Rathdonnell.

“Lisnavagh is a beautiful, magical place. It’s so inspiring and the Bunbury family have been so supportive of me. It’s really lovely,” said Ally.

Lisnavagh is a gorgeous house that’s now a wedding and special occasion venue. Ally’s in-laws William and Emily live there and have also developed it into a wellness centre. It also served as a location for an RTÉ reality show involving couples and relationships and, of course, love! Sounds familiar!

***All wrapped up*** is an entertaining, feelgood page-turner. The story flies along and is so visual, it feels like it should be a film.

“I absolutely wrote this with a film in mind! I can see it!” a delighted Ally laughed. Her dream cast would be Emma Thompson as the indominable Lady Serena, Daisy Edgar Jones as Holly and James Norton as the dashing son.

Time will tell if it ever reaches the desks of film and television show runners, but in the meantime, the book is like a big, snuggly hug that’s perfect for reading by the fire as the weather freezes outside your window.

“I felt really happy writing this book. I know I wrote it, but if you want to be cheered up, read it! The message is that we’re never too old to fall in love! Love is everywhere in this book, it’s all around us,” smiled Ally.