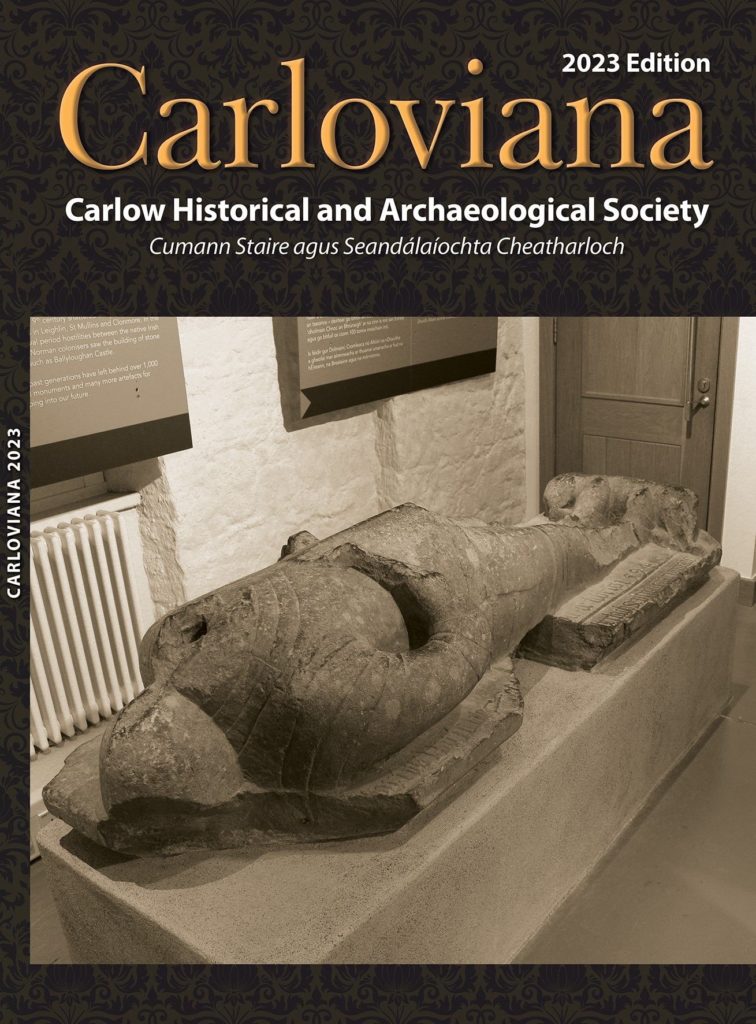 Carloviana 2023, the annual journal of the Carlow Historical and Archaeological Society (CHAS), was launched last night (Thursday 15 December) in The Talbot Hotel at 8pm.

The journal, published annually since 1947, was launched by Seán Murray, chairperson of the Laois Heritage Society and a great supporter of joint activities between CHAS and Laois Heritage over the last number of years.
There are several book reviews in the early pages of the publication. These reflect the quality of local history publications relating to Carlow produced in the last year. Among them are: Tom Byrne’s Three miles of road; Voices from a torrid time by Seamus Connellan; and Paddy Byrne’s From Kyle to Pennsylvania.

Also reviewed were Jimmy O’Toole’s book on Grange Church, Christopher Power’s books relating to the War of Independence (Lives cut short and Tom Kehoe – the man from two counties), a compendium of Seán O’Shea’s writings (Carlow local and Norman history) and Jim Shannon’s Hacketstown – a history.
The articles contained in the 2023 journal include a contribution by Margaret Doyle, titled ‘A heritage journey’, centring on Cranavane Well, Ballinvalley, Kildavin.
Christopher Power has penned an article on ‘The Grace Mausoleum in Arles’, which includes pictures of this unique funerary monument.
Turtle Bunbury writes about the locally infamous Dr Myddelton and the destruction of Carlow Castle in 1814.

‘The Curates’ House in Hacketstown’ is the title of James Shannon’s contribution. Jim’s book, Hacketstown – a history, spans from the Stone Age to the modern day and is a definitive history of east Carlow.

There are articles with religious themes from Jimmy O’Toole, whose subject is ‘Grange church bicentenary’, while ‘A new Methodist church for Carlow in 1888’ is scripted by Avril Hogan. Christopher McQuinn has provided a lengthy and hugely detailed article on ‘Early Christian sites in Tullow and neighbouring parishes’, which is illustrated with a mountain of photographs, including maps.
‘Smoke and steam over Tullow’ is a short history of the Sallins to Tullow railway, penned by John O’Donovan.
And then there is the contribution of Edward Moran, titled ‘The shop in the Irish Town’.

For the fifth year, John Kelly is the journal editor. A well-known local musician, John has been involved in researching Carlow’s history all his life, starting with research on the Carlow Workhouse and its records in 1987. John was responsible for highlighting the poor state of the Hartpole effigy in 2015, which ultimately led to its move from Portarlington in neighbouring Laois to Carlow County Museum in October 2021. John has been a regular contributor to Carloviana before taking over editorial duties.

Richard P Codd is in his first year (2022-23) as president of CHAS. In a message, Richard is high in his praise for the work of John Kelly in collating many interesting articles. The president said that the society looks forward to a busy 2023, including interesting lectures and hosting of the AGM of the Federation of Local Historical Societies in Carlow on 6-7 October.

There are 191 pages in this year’s journal, which is selling for the usual price of €15 and will shortly be available in all the usual outlets around the county, or online at carlowhistorical.com.