Kelly is a hoop 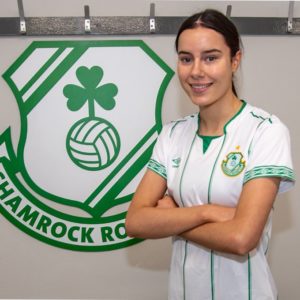 CARLOW’S Aoife Kelly is the latest player to link up with the Shamrock Rovers revolution.

The Tallaght based club have caused quite the stir in Irish women’s football since their announcement that they would be fielding a team in the National League for the first time since 2014.

Already, stars like Stephanie Roche, Aine O’Gorman and Abbie Larkin have been snapped up by the team who will be managed Collie O’Brien.

Now Kelly is making the same move, becoming their 18th new signing. Kelly started out at St Patricks Boys in Carlow before moving to Shelbourne where she initially played for their Under 17 and Under 19 teams, but she did make her senior debut late in the season as Shels completed a league and cup double, and she was an unused substitute in the FAI Cup final win over Athlone Town.

Speaking to the Shamrock Rovers website Kelly, who has been capped up to Under 17 level by Ireland, said:

“I am very happy to be signing for Shamrock Rovers Football Club. I am excited and really looking forward to the new season.”

Shamrock Rovers manager O’Brien was equally as thrilled to have Kelly link up with the team.

“I am delighted Aoife has signed for us; she is one of the best young players in the country. She is a tremendously technical player, and I can’t wait to see the impact that she can have on the team.”