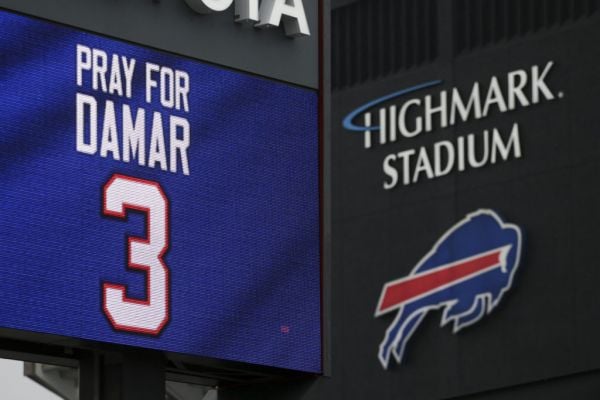 Buffalo Bills safety Damar Hamlin is showing “signs of improvement” but remains in a critical condition in hospital after suffering a cardiac arrest during Monday’s NFL game against the Cincinnati Bengals.

The Bills released the update on his condition in a brief statement on Wednesday, after Hamlin’s uncle Dorrian Glenn revealed the player had to be resuscitated twice after colliding with Bengals wide receiver Tee Higgins.

“Damar remains in the ICU in critical condition with signs of improvement noted yesterday and overnight,” the Bills said.

Damar remains in the ICU in critical condition with signs of improvement noted yesterday and overnight.

He is expected to remain under intensive care as his health care team continues to monitor and treat him.

“He is expected to remain under intensive care as his health care team continues to monitor and treat him.”

Speaking to CNN outside the Cincinnati Medical Center, where Hamlin is being treated, Glenn said: “His heart had went out so they had to resuscitate him twice.

“I’m not a crier, but I’ve never cried so hard in my life. Just to know, like, my nephew basically died on the field and they brought him back to life.

“They sedated him just to give a better chance for him to just continue to heal better. We are just taking it day by day. It seems like he’s trending upwards in a positive way.”

Hamlin was said to be on a ventilator while sedated to help with his breathing.

Bills players and staff were seen praying together on the field as an ambulance took Hamlin to hospital.

His team-mates were given a standing ovation by fans and NFL commissioner Roger Goodell soon announced that the game had been postponed following the incident.

An NFL update confirmed the fixture will not be finished this week but added that the Bills’ clash against New England Patriots on Sunday is still scheduled to go ahead.

A statement said: “After speaking with both teams and NFLPA (NFL Players Association) leadership, NFL commissioner Roger Goodell informed the clubs today that the Bills-Bengals game will not be resumed this week.

The thoughts and prayers of all of Bills Mafia are supporting you, Damar. 🙏 pic.twitter.com/lDWNAOEPX4

“The NFL has made no decision regarding the possible resumption of the game at a later date. The league has not made any changes to the week 18 regular season schedule.”

There was an outpouring of emotion across the United States in response to the incident, with fans gathering outside the University of Cincinnati Medical Center to hold candlelit vigils for Hamlin.

His family in a statement expressed their “sincere gratitude for the love and support shown to Damar during this challenging time”, adding: “We are deeply moved by the prayers, kind words and donations from fans around the country.”

The incident sparked an astonishing surge in support for a charitable campaign set up by Hamlin two years ago to purchase toys for children in need.

Donations to the Chasing M’s Foundation Community Toy Drive had passed $6.4million as of Wednesday evening in Britain.