ERIC Molloy, the former League of Ireland star who famously played in the FIFA Club World Cup for New Zealand side Team Wellington, and former county hurler Aaron Amond, brother of soccer star Padraig, are among the new faces named by Niall Carew for Carlow’s first O’Byrne Cup game of 2023. 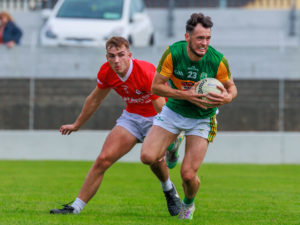 Meath, under Colm O’Rourke’s management for the first time, are the visitors tonight to Netwatch Cullen Park for the 8pm throw in, and the Carlow manager is looking forward to seeing how a promising spell of winter training translates to matchday.

“We’re training well, it’s gone very well over the last few months since we came back. The camp has been hit by illness as well at different times but overall I’m very pleased with how we have prepared.”

Molloy, of Rathvilly, and Amond, of Old Leighlin, are joined in the half forward line by the returning Ciaran Moran of Tinryland while Palatine’s Finbarr Kavanagh comes in at midfield.

Having lost a number of experienced players before the 2022 season and having had to rely on a very youthful side last year, Carew is pleased to be picking from a more mature panel this season, while the younger players who featured last season now have a year of inter-county football under their belts.

“I’m looking forward to seeing some of the new players but lads that were on the panel last year are pushing hard as well. I’m happy enough with the team that we will put out on Wednesday, it’s lot more experienced than the team we were able to put out against Kildare this time last year,” said Carew.

Mark Furey, not named in tonight’s matchday squad, will further add to that as will Ross Dunphy and Darragh O’Brien in the coming weeks. Shane O’Neill, top scorer in last year’s Carlow championship, is named among the subs for tonight.

“We’ll get a better idea of where we are at after Wednesday, training has been going well but you really don’t know until you’ve played a game. We have young lads who were on the panel last year who now have a year’s inter-county training behind them so you’re hoping they are going to improve and now that we have a few more experienced lads back, like Ciaran Moran and Mark Furey, they will help to strengthen us up physically as well,” said Carew.

At any time Meath would be a tough proposition but all the more so with O’Rourke taking charge for the first time. Carew knows how difficult an opponent they will be but is more concerned about the performance tonight than the result.

“They are a top Division 2 team, stroke Division 1 team. We are very realistic about where we are at. We are a Division 4 team, we are a very a competitive Division 4 team but they are two divisions ahead of us and we know that. But we know that on our day if we stick to what we are good at and we go through what we are supposed to be doing then we won’t be too far away,” he said.

“It is the O’Byrne Cup and we’ll be treating it in that manner. If you asked me now would I prefer to beat Meath on Wednesday or Wicklow in the first round of the league then the answer is the league game every time. What we’ll be looking for on Wednesday is the performance, can we unearth a couple of players? Is the system going to plan? Are lads able to play that system? That’s the kind of thing we’ll be able to learn regardless of the result,” he said.

Looking a little further ahead, Carew is confident that Carlow can have a good league campaign in Division 4 and after a progressive 2022 he wants to see the team keep moving in the same direction.

“It’s a tough league but we are well capable of getting out of the division, we’ll be hoping for a bit of luck in keeping our players injury free. Last year was always about building and I thought we built nicely up to the Tailteann Cup when we beat Tipperary and ran Westmeath close. We are improving and I’d like to see that improvement continue through the O’Byrne Cup and into the league,” he said.

Wed 4 Jan v Meath, Netwatch Cullen Park, 8pm – Tickets for the game must be purchased beforehand and can be bought here