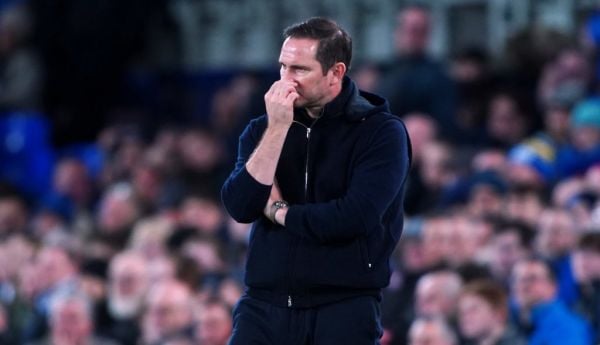 Everton manager Frank Lampard has begun preparations for Friday’s FA Cup trip to Manchester United but his job is under increasing threat after another hugely damaging defeat.

The mood turned toxic at Goodison Park during the 4-1 loss at home to Brighton, a result which has left the Toffees with just five points from the last 10 matches.

Everton are mired in a relegation battle for the second successive season and, although the manager’s future hangs in the balance, the former Chelsea boss was continuing on Wednesday to prepare for Friday’s FA Cup third-round trip to Manchester United.

Lampard grasped at straws in the wake of the Brighton humiliation, talking about passages of play he had seen this season – they drew at Manchester City at the weekend – which gave him hope.

But he needs the players to give him more.

“It’s not time to go into dressing-room talk after a result like that. I’ve been there before and it’s about taking personal responsibility – every player and myself,” he said.

“We’re all in it together, it’s not a question of anger. We’re all disappointed, we all want to win games.

“That’s for us to get right. Manchester United comes in a few days.

“It’s about, ‘What can I do better?’ and as long as you do that and don’t look left or right at anyone else, that’s the only reaction you can have.

“I have seen enough on Saturday in terms of part of the performance and certain performances.

“What isn’t good enough is the consistency of the team to get results. The first half I didn’t hate but obviously the six minutes (in which they conceded three second-half goals) is not good enough from us and if you are going to perform like that and defensively then you are going to lose games.

“We have to fight for consistency, for sure.”

While Lampard remains in post for now, his stay is precarious considering the history of owner Farhad Moshiri, who has sacked five managers in almost seven years since becoming the majority shareholder.

He has won nine and lost 19 of the 36 Premier League matches for which he has been in charge since taking over last January and only Mike Walker, who was in charge for 31 matches in 10 months across two seasons in 1994, has a worse points-per-game record 0.87 (six wins, 16 defeats).