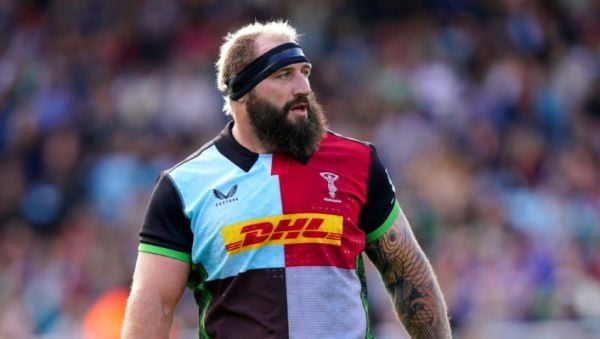 Joe Marler has reiterated an apology to Jake Heenan, his Harlequins team-mates and the club after he was suspended for comments made towards the Bristol forward.

Quins and England prop Marler was hit with a Rugby Football Union charge for conduct prejudicial to the game. He made an offensive remark about Heenan’s ill mother during a Gallagher Premiership game last month.

Marler received a two-week ban, with a further four weeks suspended, in his latest brush with the rugby authorities.

Joe Marler has received a two-week suspension following the conclusion of his disciplinary hearing earlier today.#COYQ

In 2016, he was handed a two-week suspension and fined £20,000 for calling Wales prop Samson Lee “gypsy boy”, and two years ago he received a 10-week ban for grabbing Wales lock Alun Wyn Jones’ genitals during a Six Nations game.

An independent disciplinary panel took Marler’s chequered history into account, but also noted that he had apologised to Heenan.

“I’m really sorry to Jake Heenan and his family, the guy I insulted or tried to insult, and also to my team-mates and to the club, because they must really now be at a point where they’re like ‘here we go again’,” Marler said, on his personal podcast The Joe Marler Show.

“I’ve been back and forth about the whole situation, of, ‘Oh, it goes on all the time; you should hear some of the stuff’. All this lot. ‘What’s the big thing, and would there be a hoo-ha if his mum wasn’t in hospital?’ Probably not.

“But, actually, we always have a choice, don’t we? We have a choice whether you can actually use this for good, regardless of what the RFU have done in terms of banning or setting an example.

“It’s about what can I do to make this be useful and good for me moving forward.

“And I guess it is a realisation that I haven’t got long actually being able to play the game left. So I want to use whatever time I have left at the club to actually embrace it and play the game.”

Marler said he had “absolutely no idea” that Heenan’s mother was in hospital and revealed that his (Marler’s) wife took him to task over the whole episode.

“The bottom line is the game is about respect, that’s one of the key values of the game, players respecting each other.” 🤝

Joe Marler is suspended for two weeks after comments made towards the Bristol flanker Jake Heenan.#GallagherPrem pic.twitter.com/0oaoBswmNp

“She turned round to me after and she was like, ‘you’re an idiot, aren’t you? You’re just a moron’,” Marler added.

“I went, ‘what do you mean? I thought you’re meant to defend me’.

“And she went, ‘Why am I defending you? That’s not even a funny attempt. Why don’t you just stop doing it? Or, if you feel the need to do it, just don’t bring family members into it.

“‘You never know what’s going on in people’s lives and just because it doesn’t affect you on the pitch doesn’t mean it’s not going to affect other people’.”