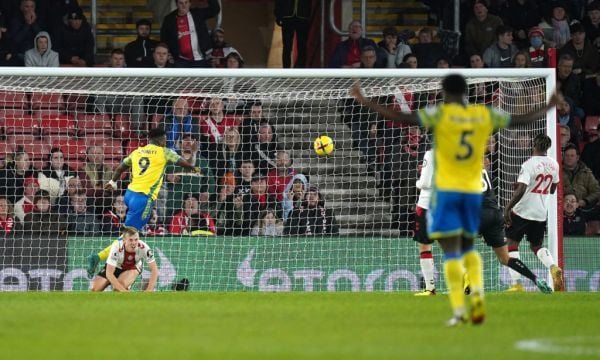 Nottingham Forest climbed out of the Premier League relegation zone courtesy of a precious 1-0 victory which heaped more misery on bottom club Southampton.

Taiwo Awoniyi’s fifth goal of the campaign earned Forest a first top-flight away success of the season to strengthen their survival hopes.

Steve Cooper’s resurgent side have now taken 11 points from the last 21 available, having only managed six from the previous 33, and fully merited a significant triumph on the south coast.

Manager Nathan Jones has overseen four of those defeats and there was little to suggest he is set to launch a successful survival mission following another deflating outing at St Mary’s.

In a high-stakes encounter notable for Bhupinder Singh Gill becoming the first Sikh-Punjabi assistant referee to officiate in the Premier League, Che Adams wasted the best opportunity for the hosts, who slipped four points from safety.

Forest were content to soak up pressure following their 27th-minute opener – the game’s only attempt on target – after earlier hitting the crossbar through the impressive Brennan Johnson.

The two-time European champions arrived in Hampshire with the division’s worst away record, ready to take on the team with the poorest home form.

Manager Cooper stuck with the starting XI which began Sunday’s creditable 1-1 draw with Chelsea, while midfielder Romeo Lavia was among three players recalled by Southampton.

An elaborate light show illuminated the stadium ahead of kick-off and the energy initially transferred on to the pitch as both sides squandered glorious early chances.

The woeful miss was a major let off for the visitors and they almost compounded Saints’ frustration with their first attack.

After Awoniyi delivered a low cross from the left, Ryan Yates’ mishit shot fell kindly to the unmarked Johnson but his rising effort struck the frame of the goal.

There was to be no second reprieve for Southampton as the slack defending which has been a hallmark of a dismal campaign once again led to their undoing.

Saints defender Lyanco dithered and then sloppily conceded possession on halfway, allowing the jet-heeled Johnson to burst clear and square to give Awoniyi a simple tap in.

The breakthrough was only Forest’s second goal on the road in the league this season and broke a six-game drought dating back to a 1-1 draw at Everton in August.

Saints conjured nothing in response before the break and suffered the recurring ignominy of being jeered from the field by their success-starved supporters.

The home side enjoyed plenty of possession during a tight second period but failed to test Henderson, while appearing susceptible to counter attacks.

They were given four minutes of added time to chase a valuable leveller.

However, Forest were more than comfortable and jubilantly celebrated a first top-flight away win since a 2-1 success at Blackburn in May 1999 as loud boos emanated from three sides of the ground.