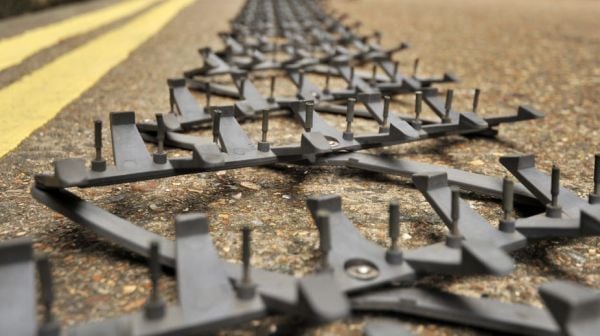 A stinger device was used on a car which had crossed the Border into the North after it had refused to stop for gardaí in Co Donegal.

Five teenagers have been arrested following the incident which occurred shortly after midnight on Wednesday.

A white Toyota Aqua failed to stop for gardaí in the Lifford Bridge area before driving off towards Strabane, Co Tyrone.

The PSNI observed the car heading towards Newtownstewart where it failed to stop for police again.

A stinger device, which is used to deflate tyres, was deployed and the vehicle was stopped on Beltany Road in Omagh.

The driver, aged 16, was arrested on suspicion of driving-related offences, including aggravated vehicle taking causing damage to the vehicle, driving when unfit through drink or drugs, dangerous driving, going equipped for theft, and driving without a licence.

The four teenage passengers, aged between 15 and 18 years old, were arrested on suspicion of offences including going equipped for theft.

All five teenagers remain in custody at this time.

PSNI Inspector Kyle Rowntree said: “These arrests are as a result of good work of local officers in Strabane and tactical support group colleagues.

“As enquiries continue, and as we liaise with An Garda Siochana, we’re appealing to anyone who captured dash cam footage of a white Toyota Aqua, from around midnight, being driven between Lifford Bridge and Beltany Road in Omagh to call 101 and quote reference number 13 of 04/01/23.”