‘The worst I have seen’: Emergency nurse expresses concern at ‘relentless’ conditions 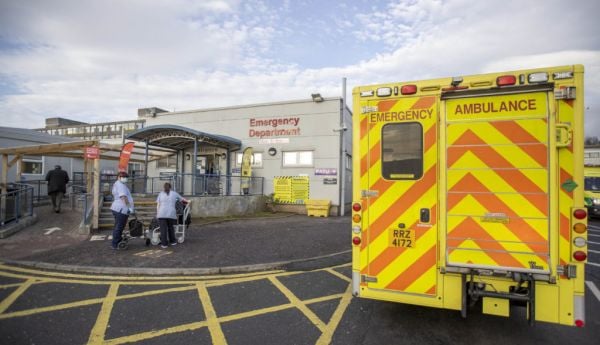 An Emergency Department (ED) nurse working in the North has described “relentless conditions” in hospitals.

Stephen McKenna admitted he would be concerned for any of his loved ones if they had to seek treatment in an emergency department at this time because staff are “overwhelmed”.

Hospitals across Northern Ireland have been exceptionally busy this winter, with appeals previously made for assistance to aid the swift discharge of patients who are fit to leave to free up beds.

Mr McKenna, who is a member of the Royal College of Nursing’s emergency nurse network, described recent weeks in emergency departments as “relentless”.

“It’s hard to put into words how difficult it has been for healthcare staff across the board and, in particular, in emergency care,” he told BBC Radio Ulster.

“It’s quite possibly the worst I have seen it in my six years working in A&E.

“I would probably liken it to emergency care in developing countries and I can, hand on heart, say that that is the case.

“I had a nursing elective studying abroad, and I was horrified at what I saw when I was in Nepal, and I am starting to see similar things right here in Northern Ireland, and across the UK, and it is heart-breaking for the staff.”

Mr McKenna described patients cared for in areas not designed for care, such as corridors, people being nursed “head to toe, top to tail, side by side, crammed into spaces”.

“There are people literally lying and sitting side by side in conditions that would otherwise have been completely unacceptable just five years ago,” he said.

“Nobody came into nursing or medicine to provide sub-standard care and, as much as we try our best to deliver the best care that we can in line with the guidelines that our nursing and midwifery council set out, and the [health] trusts expect from us, we are not able to give that because how can you look after someone who is lying side by side beside someone potentially with dementia, or delirium, confusion, detoxing from alcohol or drugs, agitated, distressed.

“Those patients need to have their own unique space. You’re supposed to be able to care for people with dignity – you cannot do that at the minute, the conditions are absolutely horrific.”

Mr McKenna said he would be “extremely worried” if he had a relative going into an emergency department.

“To the point where I would probably want to be with them every step of the way,” he said.

“I know, sometimes for nurses who work in emergency care settings, it can be a little difficult to have relatives at the bedside all the time because it can make your work a little more difficult because you can’t potentially get on with things you need to do, but I can see why people want to be there now.

“I would be really worried about leaving a grandparent, a mother, a sister, a brother in an emergency department for fear that they’re going to be lying somewhere potentially distressed by other patients, potentially not getting the care they need because the staff are just completely overwhelmed.”

Linda Robinson, chief executive of Age NI, called for an urgent look at problems in the social care system to allow swifter discharges.

“At this point in time, we do not have community care packages on the scale that are needed, but if we pool those community resources and we pool those staff – we did it in Covid – we had hotels’ wings taken over where we could place people and a pool of staff,” she said.

“Middle to long term our request would be that decision makers sit down with people who are involved and who experience the care at home, the providers who deliver it and the decision makers, to look at the independent review of domiciliary care because that’s been on the cards for the last 10 years.”

Meanwhile, the North’s Public Health Agency has urged the take-up of Covid and flu vaccinations amid an expected surge in respiratory illness such as scarlet fever in the coming weeks.