Amid overcrowding, paramedics will avoid UHL when treating non-urgent 999 patients 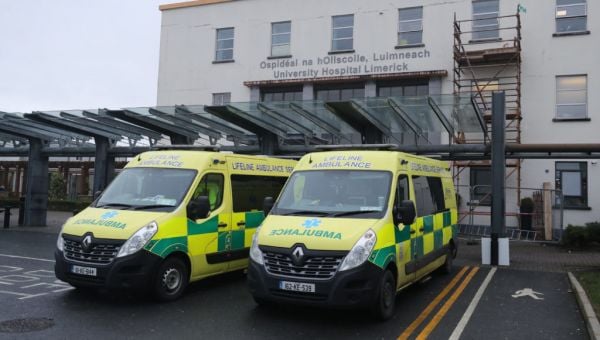 Ambulances operating in the mid-west region are to begin transporting non-urgent 112/999 patients to Ennis General Hospital from next Monday as part of agreed new protocols aimed at easing pressure on the Emergency Department at University Hospital Limerick (UHL) caused by chronic overcrowding, according to reliable sources.

Since 2009, the Model 4 UHL has provided the only 24-hour Emergency Department service for a population of around 400,000 after A&E services were closed in Ennis and Nenagh and St John’s Hospital, Limerick — all model 2 hospitals.

The UL Hospitals Group, which operates the mid-west hospitals, declared a major incident at the UHL ED last Monday when management said record levels of patients attending the department could not be sustained.

Under the 2009 A&E reconfiguration policy, ambulances in the region could only transport 112/999 patients to UHL’s ED, bypassing St Johns, Ennis, and Nenagh.

However, according to reliable sources, ambulances are to begin transporting 999 call out patients, who re deemed not to require critical care in the Limerick ED, to Ennis, under the new protocols from next Monday.

All urgent 112/999 patients will continue to be prioritised at UHL’s ED as it is the only hospital site in the region that is equipped for treating critically ill patients.

Correspondence sent on Thursday to all National Ambulance Service (NAS) staff in the mid-west read: “From 8am, Monday 9th January 2023 112/999 patients can be transported directly to the Medical Assessment Unit in Ennis Hospital providing: The patient meets the agreed clinical criteria; The patient has been accepted by the MAU Physician in Ennis.”

A source said: “Obviously things are changing if paramedics are allowed back into Ennis. There is obviously a new protocol that if a patient fits criteria, the paramedic can bring them to Ennis rather than bringing them directly to Limerick.”

“Paramedics were not allowed do that all along, they had to bring patients to Limerick and they were bypassing St Johns, Ennis and Nenagh.”

“In my opinion it’s an admittance that a mistake was made years ago shutting down the three A+Es in St Johns, Ennis and Nenagh.”

“You have a catchment of 400,000 people all heading to one hospital, it’s ridiculous, paramedics were bypassing hospitals to go to UHL.”

“Ambulances were picking up patients living a few feet from St Johns Hospital and couldn’t bring the patient into St John’s because they had to bring them to UHL, it has been an absolutely crazy situation.”

The NAS, HSE and the UL Hospitals Group have all been asked for a response.