Carlow push Meath all the way

MEATH manager, Colm O’Rourke, said there were no raised voices at half-time in their O’Byrne Cup first round game against Carlow at Netwatch Cullen Park on Wednesday. Trailing 1-5 to 0-3, the national league division 2 side had been outplayed by a side who will be plying their trade two divisions below them when the league throws in at the end of the month.

Instead, O’Rourke said Meath, with seven debutants,  took responsibility and went about putting it right in the second half.

“The lads themselves knew they were not performing. We made a few changes and things did improve. The last 10-15 minutes were quite good,” pointed out O’Rourke.

Carlow owned the ball in the first half. Conor Crowley, Jordan Morrissey and Ciaran Moran in particularly ran at the Meath defence at will while Carlow also played keep ball for long periods.

The only goal of the game came on 24 minutes when a high ball was met by Darragh Foley and he guided it past Sean Brennan in the Meath goal. With Foley picking off a number of long range placed balls, Carlow were well worth their lead at the break. O’Rourke acknowledged this.

“Carlow really put it up to us and it took us a long time to get to grips with the game. We finished strongly and that is the thing which would have pleased us most. We would have been disappointed with our first half performance,” he said.

Meath set their stall early in the second half with Diarmuid Moriarty landing a point inside 30 seconds. Foley hit back with a Carlow point but Matthew Costello cancelled that one out.

Crowley was unlucky not to find the net at the scoreboard end of the ground when, in an exchange of passes with Foley, he saw his shot glance off the right-hand upright and go wide.

Meath built on their good fortune and in the final quarter pulled away for victory with two of their second half substitutes, Keith Curtis and Cillian O’Sullivan, raising white flags. 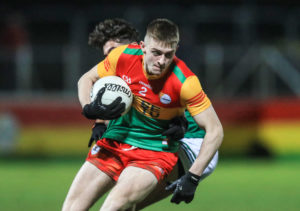 There were no three-pointers but O’Rourke wasn’t worried.

“No goals, Missed a few but we at least we created chances,” he said.

Carlow almost stole in for a late goal but their keeper, Sean Brennan,  denied Crowley with a good save on his near post.

“That is what the keeper is for,” smiled O’Rourke.

“Very pleased with the performance. That is all that we were looking for. It would have been nice to get the victory but we had 26 lads there tonight, in and around, and they acquitted themselves well.

“Very happy. No injuries. A couple of knocks where we were forced to take off a few lads. If it was a league or championship game we might have left them on but you don’t take any chances in the O’Byrne Cup. You are trying to save yourself so I’m happy enough,” he said.